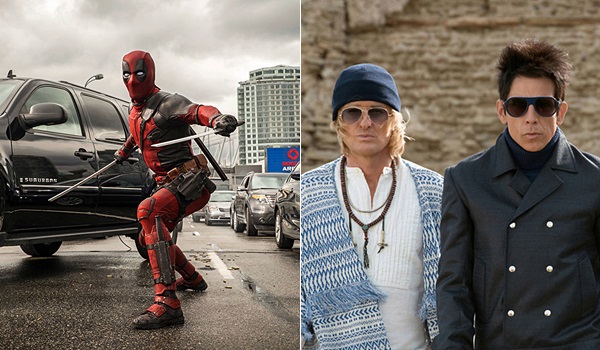 Fox's Deadpool will be unleashed into theatres over Presidents Day weekend. The antihero comic book adaptation starring Ryan Reynolds has been setting social media on fire for months now; a sure indication of the high anticipation level that is already out there for the film. BoxOffice is confident that Deadpool will represent another strong performer in Fox's X-Men universe and expects the film to have the second largest four-day Presidents Day weekend debut on record.

Also opening in wide release over Presidents Day weekend will be Paramount's Zoolander 2 and Warner's How to Be Single. BoxOffice expects both films to take a clear backseat to Deadpool.

- Deadpool has been one of Marvel's more popular characters for quite some time now, especially within the X-Men universe. The first film dedicated to Deadpool is sure to bring out comic book fans in big numbers.

- The film has been one of the stronger performing films on Twitter throughout much of 2015.

- Audience reaction to the film's trailers has been especially strong over social media.

- While Deadpool is a stand-alone film, Fox has a strong history when it comes to its X-Men universe films. Previous stand-alone films in the X-Men universe included 2009's X-Men Origins: Wolverine (which opened with $85.1 million and grossed $179.9 million in total domestically) and 2013's The Wolverine (which opened with $53.1 million and finished with $132.6 million domestically).

- It has been awhile, but there is a past history of Marvel films performing well over Presidents Day weekend. Without adjusting for ticket price inflation, 2003's Daredevil had a four-day opening of $45.0 million (and went on to gross $102.5 million domestically), while 2007's Ghost Rider opened with $52.0 million over four days (and went on to gross $115.8 million).

- The online popularity of Deadpool could inflate online signs for the film in comparison to online activity for other comic book films.

- Unlike most comic book based films, Deadpool won't have the advantage of higher priced 3D admissions (though the film will be playing in IMAX).

- As what is sure to ultimately be a "hard" R-rated film, Deadpool won't get the type of admissions from younger moviegoers that most other comic book films do. However, X-Men universe films have already skewed fairly heavily towards older moviegoers to begin with in recent years.

- The original Zoolander wasn't a blockbuster back in 2001 (the film opened with $15.5 million and finished its domestic run with $45.2 million), but the film has developed a larger cult following over the years.

- While Ben Stiller and Owen Wilson have both seen their popularity at the box office decline in recent years, the re-teaming of the two in a long-awaited Zoolander sequel has created a level of excitement.

- The film also features Will Ferrell, Penélope Cruz and Kristen Wiig and will have a number of cameo appearances as well.

- As was the case with 2013's Anchorman 2, having established a much larger cult following over the years doesn't always transfer into a significantly stronger performance for a long awaited sequel (especially when it comes to admissions).

- While the film has had a solid presence on Twitter so far, it is also only generating a small fraction of the tweets that Deadpool has. Opening against Deadpool will make it tougher for Zoolander 2 to break out.

- Twitter activity for Zoolander 2 is also quite likely to be inflated, due in part to a sizable amount of the film's social network activity being about events surrounding the film (such as the recent controversy over Benedict Cumberbatch's character) and not always about a desire to see the film itself.

How to Be Single (Warner Bros. / New Line)

- How to Be Single should receive a sizable opening weekend boost from the Valentine's Day holiday falling on Sunday.

- Twitter activity for the film has been quite soft thus far, especially given the size of Dakota Johnson's online following after Fifty Shades of Grey.

- The film's initial trailer comes across as rather generic and doesn't really offer moviegoers anything new.

- Based on past history of other films released as Valentine's Day options, How to Be Single is likely to fall off very quickly after opening weekend.

Check out our complete long range forecast in the table below.

Tags: How to Be Single, Zoolander 2, Deadpool, predictions