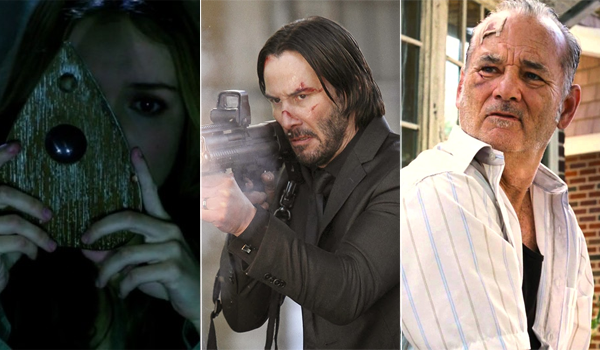 Two new wide releases and a nationwide expansion make up this weekend's penultimate frame before the holiday season begins.

- The brand name and PG-13 rating should help sell the horror pic thanks to awareness built up over multiple generations through the board game.
- Releasing in close proximity to Halloween will no doubt entice horror fans and mainstream audiences alike.
- Twitter and Facebook activity have been outstanding, comparing very well with recent hit Annabelle.

- Did Annabelle satiate audiences' desire for scares over the past few weeks?
- Flixster activity has left something to be desired overall, although its own activity has picked up in the past two weeks.
- The recent string of box office hits since late September could put a damper on breakout odds.

- Strong buzz and critical reviews have been snowballing into very positive signs for this sleeper.
- Marketing has done a fine job at emphasizing the life-imitating-art aspect of Keanu Reeves' comeback.
- Online activity has soared in recent weeks, thanks partly to Lionsgate's advance screenings around the country.

- Has Reeves reconstructed his image enough to generate drawing power outside the film community?
- The recent string of box office hits since late September could put a damper on breakout odds.

- The pairing of comedy icon Bill Murray and new-found star Melissa McCarthy should be quite appealing, especially in suburban areas for this flick.
- TWC has expressed a great deal of confidence in the film's ability to play following a solid run in platform and limited release this month.

- Not coming from one of the major studios, it's still possible (if not likely) that mainstream audiences aren't altogether aware of the film.
- The surprise announcement of a 2,000+ theater expansion this weekend may still translate into a slow-burn type of run.