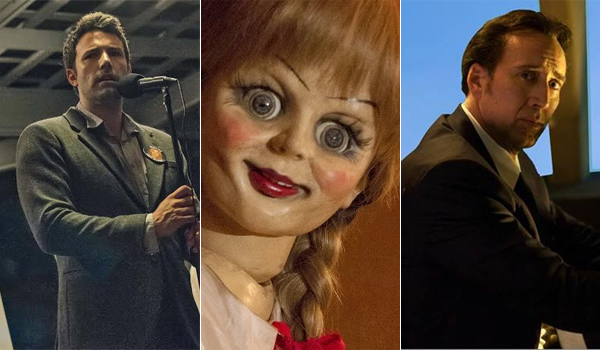 - The wide popularity of the original novel has created an adult fan base greatly anticipating the adaptation.
- Star Ben Affleck has enjoyed a large amount of renewed goodwill in recent years thanks to his success in front of (and behind) the camera on works like Argo and The Town.
- Director David Fincher boasts a fan base of his own thanks to awards-contending hits like The Social Network, The Curious Case of Benjamin Button, and The Girl with the Dragon Tattoo.
- Early buzz and critics' reviews suggest the film delivers on its promises of a taut mystery/thriller, a recipe for crowd-pleasing.
- Twitter buzz has significantly improved this week with over 50,000 tweets.

- Despite Affleck's recent successes, will audiences hold last year's Runner Runner against him?
- Fincher's name carries a lot of appeal among cinephiles, but he's not exactly a household name among casual viewers.
- The film's early buzz may more easily suggest strong holding power as opposed to a big opening.
- Flixster audience buzz is solid, but the film's Facebook footprint leaves something to be desired with just over 104,000 fans.
- The breakout success of The Equalizer could cut down on interested adult audiences this weekend.

- Warner Bros. has wisely pushed the film's nature as a prelude to last year's horror blockbuster, The Conjuring.
- Twitter and Facebook buzz have been excellent in recent weeks, with the former leading all yet-to-be release movies.
- Horror fans haven't had much to get excited about this year; the genre is due for a breakout.

- Will Conjuring fans be completely sold on the idea of a spin-off whose only carryover character is a doll?
- Flixster activity isn't outright negative, but it leans modest.
- Opening against an anticipated adaptation like Gone Girl will certainly limit the potential adult audience.

- Faith-based films have had a banner year at the box office in 2014.
- The Left Behind book series was one of the best-selling during its time of release.
- Adding a Hollywood name like Nicolas Cage could boost interest among faith-based audiences.

- Given Cage's general resume over the past few years, his name could also turn off moviegoers.
- Faith-based audiences won't show up for anything, and there may be a growing concern about Hollywood taking too big a hand in such films.
- Twitter and Flixster activity significantly trail that of Heaven Is for Real.