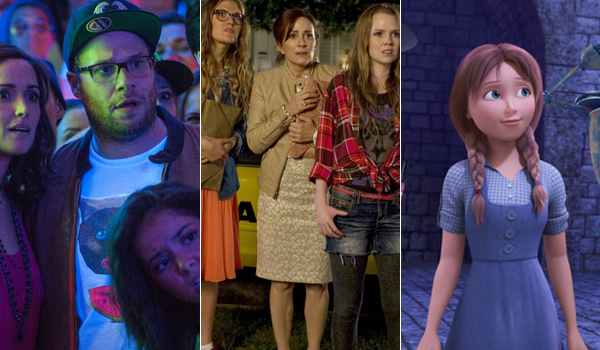 Three new releases open on May 9, with the anticipated comedy Neighbors leading the pack.

- Seth Rogen's star power has surged again since last year's This is the End hit it big.
- Zac Efron has a few box office successes on his resume. His draw among women is also significant for this kind of movie.
- Strong early buzz from critics and screenings at SXSW and CinemaCon should translate into commercial success.
- Director Nicholas Stoller has plenty of experience working in the genre, previously helming Forgetting Sarah Marshall and Get Him to the Greek.
- As the first widely appealing comedy to open since January, demand is definitely there.

- Will the prank aspect of the film overshadow the broader premise and limit opening weekend potential before word of mouth kicks in?
- One hit last year isn't enough to guarantee that Rogen's fans will automatically turn out again, even if the odds support it.

- With Rio 2 being the last animated release, parents may be looking for a new option for the young ones.
- Social media buzz isn't altogether discouraging.

- Clarius Entertainment, the film's distributor, has no previous experience releasing an animated title.
- Parents may just opt for The Amazing Spider-Man 2 or Rio 2 again.

- The film's trailer ran in front of Heaven is for Real, increasing its exposure to faith-based audiences.
- A release coinciding with Mother's Day this weekend could give the low-profile flick a needed boost.

- The Other Woman's success is likely to overshadow this flick as the preferred option among most women this weekend.
- The film's low theater count will significantly hinder it.