Long Range Forecast: 'A Million Ways to Die in the West' 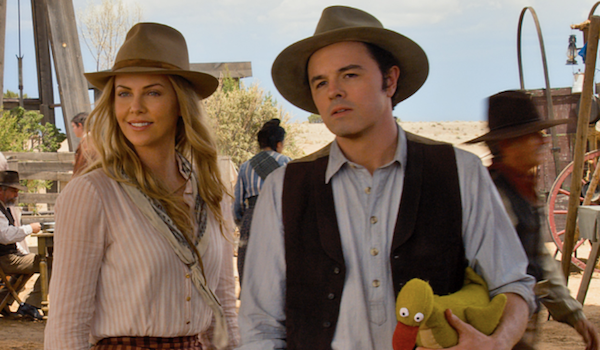 Writer/director Seth MacFarlane returns after the phenomenal success of Ted--a surprising $549.4 million global hit from late June 2012--with A Million Ways to Die in the West, another R-rated comedy that will try to rake in serious cash when it opens on May 30. Will A Million Ways match Ted's success or will it just be a minor hit on the way to Ted 2? BoxOffice takes a closer look at the Universal releases commercial prospects.

A Million Ways to Die in the West
(Universal)

- Seth MacFarlane has built up a large amount of trust thanks to the success of Family Guy and Ted.

- The ensemble cast is one of the finest assembled this summer. The combined power of stars such as Liam Neeson, Charlize Theron and Neil Patrick Harris will definitely help entice plenty of moviegoers.
- Universal's marketing approach is wisely selling the film as being from the creator of Ted.

- Opening in between two other comedies--Neighbors and 22 Jump Street--will not be an easy task.
- Following one week after X-Men: Days of Future Past should be tricky. Both films are aimed at Males 18-34.
- Modern Western comedies tend to disappoint at the box office. Remember Wild Wild West?

Check out our prediction for A Million Ways To Die In The West and other films in the table below.

Tags: predictions, A Million Ways to Die in the West