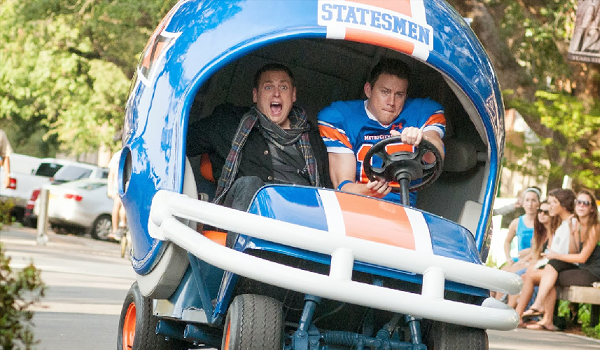 Channing Tatum and Jonah Hill join forces again for June's 22 Jump Street. Both stars have experienced massive success since the last film was released: Tatum in Magic Mike and Hill in This Is The End and The Wolf of Wall Street. Will their increased clout help 22 Jump Street pass its predecessor's impressive $138.4 million cume?

- The first film showed amazing staying power at the box office: it opened to $36.3 million domestically and managed to multiply that nearly four times over by the end of its run.
- Tatum and Hill are on fire these days.
- Co-star Ice Cube is coming off the strong performance of Ride Along.

- Being released after two other R-rated comedies--Neighbors and A Million Ways To Die In The West--won't be easy.
- If X-Men: Days of Future Past shows more staying power than expected it could eat into 22 Jump Street's tally.
- The first film is so beloved that many fans may have unrealistic expectations for the sequel.

Check out our predictions for 22 Jump Street and others in the table below. Major changes this week include X-Men: Days of Future Past (up), Brick Mansions (down), The Quiet Ones (down).