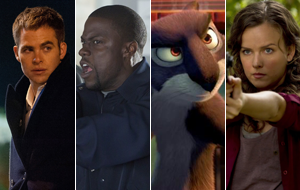 Four films join our forecast this week as our first look at January 2014's releases continues.

- The Jack Ryan franchise has enjoyed a handful of hits in the past.
- Chris Pine brings a familiar name and face to the franchise reboot.
- Director Kenneth Branagh proved that he can handle tentpoles after successfully helming 2011's Thor.
- Having moved from its original Christmas slot, the slower winter season could benefit the film if older crowds show up.

- Will audiences care to see a Jack Ryan reboot, more than a decade after Ben Affleck briefly took the reigns from Harrison Ford?
- Chris Pine proven to be a box office draw on his own.
- The January release could also speak to a lack of confidence in the movie.
- The crowded weekend of wide openers.

- Kevin Hart is in the middle of surging popularity, recently evidenced by Let Me Explain and 2012's Think Like a Man.
- Ice Cube also has a solid box office history, including his recent supporting turn in 21 Jump Street.
- Comedies can play well this time of year. See Identity Thief.

- Are audiences willing to see Hart as a leading man?
- Ice Cube's past successes were released quite some time ago.

- Horror flicks generally have a more positive recent history than horror sequels.
- The Devil Inside opened to strong numbers back in January 2012.

- Will audiences go in for another horror movie one week after Paranormal Activity: The Marked Ones?
- The lack of star names or drawing power.

- This will be the first animation offering for kids and families since November's Frozen.
- Gnomeo & Juliet surprised many in the industry with its performance back in early 2011.

Notable changes on our forecast this week include The Hobbit: An Unexpected Journey (down), Black Nativity (down), Oldboy (down) and Justin Bieber's Believe (down).

Check out our forecast for these and other upcoming films in the table below.