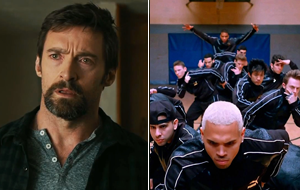 Following a strong debut from Insidious Chapter 2 last weekend, the post-summer market gets an infusion of adult-oriented drama with Prisoners on Friday. Sony's Battle of the Year also debuts.

- The ensemble star power of Hugh Jackman, Jake Gyllenhaal, Viola Davis, and Melissa Leo.
- Aside from the success of The Butler, adult moviegoers haven't had much to bring them out to theaters since before summer.
- Facebook and Flixster activity for the drama have been considerably strong.
- Awards buzz, particularly for Jackman, could give the film a boost.

- Opening near the end of September likely means a run more about legs than a big opening weekend.
- Twitter activity has left something to be desired in comparison to last year's End of Watch.
- On their own, most of the ensemble cast aren't known as major box office draws.

Battle of the Year

- Similarly-themed dance pics have found their share of success in the past (namely the Step Up franchise).
- This could be a viable option for teenage crowds this week--assuming they've had enough of Insidious Chapter 2.

- Buzz across all forms of social media is virtually non-existent.
- The dance pic craze seems to have burnt out.
- The lack of any star power and low theater count will further prevent a breakout.

Check out our forecast for these openers and the remainder of the weekend's top 10 in the table below.

Tags: Prisoners, Battle of the Year