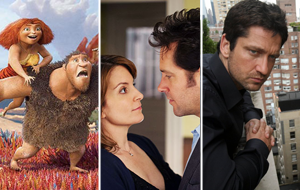 Admission, The Croods and Olympus Has Fallen join our Long Range Forecast this weekend. Each is currently scheduled to open on Friday, March 22.

- Tina Fey hasn't been in many films, but Baby Mama and Date Night both had very solid box office performances.
- The combination of Tina Fey and Paul Rudd could help the film appeal to date night audiences.
- The film could have a good chance of holding up well given the past box office history of both Fey and Rudd.

- While they aren't the most direct competition, The Croods and Olympus Has Fallen will make the marketplace as a whole quite crowded that weekend.
- As a Focus release, likely won't receive an ultra-wide opening weekend location count.

- Competition for family audiences in March and April appears to be light, especially if parents keep younger children away from Oz: The Great and Powerful and G.I. Joe: Retaliation.
- DreamWorks Animation and Fox are sure to do everything they can to make their first collaboration a success.
- DreamWorks Animation has had good March performances in recent years with 2009's Monsters vs. Aliens and 2010's How to Train Your Dragon.
- Holding power is likely to be strong.

- DreamWorks Animation is coming off of Rise of the Guardians, which delivered the studio's most disappointing performance in quite some time.
- Early marketing suggests that the film is lacking in the the cuteness department, which typically helps draw the attention of younger moviegoers.

- Will beat fellow White House under attack film White House Down to the punch by three months.
- The film boasts a strong ensemble cast headlined by Gerard Butler, Aaron Eckhart and Morgan Freeman.

- Early internet reaction to the film's trailer appears to be mixed.
- Gerard Butler currently isn't anywhere near the box office draw he was only a few years ago.
- Likely to be front-loaded, especially with G.I. Joe: Retaliation opening just one week later.

Notable changes on our forecast this week include ...

Tags: The Croods, Olympus Has Fallen