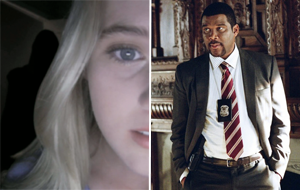 Following three consecutive rebound frames at the box office, Hollywood is banking on that trend continuing this weekend with the release of Paranormal Activity 4 and Alex Cross.

Holdovers have generally held well against the release of prior Paranormal Activity films, although the exceptions this weekend should be Sinister and Taken 2.

Fandango's top five sellers on Wednesday were not available at the time of writing.

- Facebook, Twitter and Flixster metrics are all exceeding that of Paranormal Activity 3 through the same pre-release time period last year (three days out from release).
- Mirroring the one-a-year release strategy of the Saw films has paid huge dividends over the last three Octobers.
- The third film posted a massive $52.6 million opening in 2011 (an October record) and out-grossed the second film by nearly $20 million with $104 million domestically ($4 million less than the original).

- Last weekend's release of Sinister could soften some demand for the horror audience, though it didn't necessarily generate thunder-stealing word of mouth.
- Nearly every franchise eventually suffers from sequel fatigue (the prime comparison here being Saw). Has the Paranormal Activity series peaked yet?
- Reviews aren't as strong as the franchise has become used to. With 9pm shows kicking off the release early on Thursday night, if word of mouth isn't up to par this is exactly the type of film that can and will be impacted by social media reactions by the end of Friday.

- Tyler Perry has proven to be a consistent draw among his own fans.
- The Alex Cross character has a strong following among fans of the book series.
- Adjusted for inflation, the two previous Alex Cross movies (1997's Kiss the Girls and 2001's Along Came a Spider) starring Morgan Freeman debuted to over $23 million.

- This is Perry's first starring role in a film outside of his universe, so his star power will be tested in an entirely new way.
- The amount of competition in the market doesn't bode well for expanding beyond the film's target audience.

Check out our predictions for Paranormal Activity 4, Alex Cross and the rest of the top 10 in the table below.