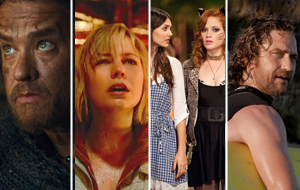 - Being based on a well-known novel could help.
- Warner Bros. has pushed the ambitious sci-fi drama with a fairly strong marketing campaign.
- The ensemble cast should draw at least some attention.
- Online interest was high at one time back when the trailer debuted online, thanks partially to the involvement of the Wachowskis and the book's fan base.
- Flixster activity has been quite strong, with a high 98% "want to see" score across 28,000+ voters.

- The esoteric nature of the story could be off-putting for mainstream viewers.
- Following several breakouts in October on top of releasing one week before the start of the holiday movie-going season could lessen audience demand this weekend.
- The estimated 2,000 theater count is the lowest for a Wachowski-produced film since before The Matrix.
- The R rating and longer running time could serve to limit the audience even more.
- Despite the strong Flixster activity, Twitter and Facebook buzz have been lacking.

- Being based on a popular video game gives it some built-in audience.
- Horror fans will be looking for this kind of movie on pre-Halloween weekend.

- The first film isn't exactly well-remembered.
- With Sinister and Paranormal Activity 4 having already opened over the past two weekends, that same horror audience has other options.

- Nickelodeon movies have a fairly successful history.
- The younger cast gives it a slight advantage in appealing to teens this weekend.

- Younger audiences could easily skip this in the way that they skipped Prom.

- Gerard Butler gives this otherwise low-profile film a recognizable face to attract audiences.
- The feel-good tale of the film could bring out families.

- With so much competition in the market, its hard to see a small release such as this breaking out with Hotel Transylvania still doing well and Wreck-It Ralph poised to interest families next week.
- Butler isn't exactly a guaranteed draw.
- The estimated 2,000 theater count will also hold back its audience potential.

Check out the table below for our predictions on this weekend's top 12 films.