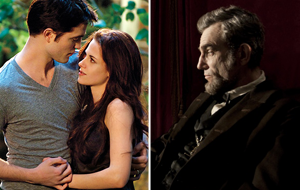 - Despite the previous film's slight box office decline, the franchise has displayed a reliable and mostly predictable track record.
- The finale factor. Harry Potter proved that franchises not conforming to the design of a trilogy can still see increases in audience with a pivotal film in the storyline.
- Rob-sten drama.

- The hype outside the fan base for the finale doesn't yet seem to be there in the same way it was for Harry Potter's ending.
- Stewart has given Twilight fans another reason to dislike her. Could there be a die hard fan backlash against her? If so, does Pattinson's appeal still neutralize it for the final movie? (Probably.)

- The trifecta of a hit: Steven Spielberg + one of the most respected and acclaimed actors working today + one of the most popular and beloved historical American figures. The ensemble cast should attract audiences as well.
- War Horse banked nearly $80 million with a less-than-high profile cast and less familiar or mainstream-friendly plot.
- Awards buzz could carry it long through December and January.
- Older audiences will be looking to this film in the midst of other holiday blockbuster fare.
- Online buzz seems excellent for a biographical drama and the early marketing campaign exudes a lot of confidence.

- Spielberg or not, Abraham Lincoln or not... the film is *still* a historical drama and could easily under-perform without awards buzz.
- The film will need some aspect of a "crowd-pleaser" (ala 2010's The King Speech) to help it reach larger box office heights.

Notable changes on our forecast this week include Hotel Transylvania, Looper, Pitch Perfect, Won't Back Down, Frankenweenie, Taken 2 and Fun Size.