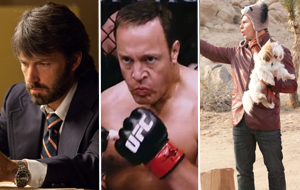 - Ben Affleck has revived his career as an actor while establishing himself as a quality director for the masses. The critical and commercial success of Gone Baby Gone and The Town should help the appeal of this.
- Potentially early Oscar bait that could help extend its legs.
- Similar Fall release date as The Town.
- Online reactions to the trailer have been quite positive.

- A potentially less mainstream-friendly plot than The Town which could give it more of a Munich or Body of Lies-type of October run.
- Competition from two other star-driven vehicles: Taken 2's second weekend (if it takes off) and Killing Them Softly opening one week later.

- Kevin James has his fair share of an audience.
- This is the first mainstream comedy to release since The Campaign in early August, so demand should boost the upfront appeal.
- Has a better chance of bringing in family audiences than The Dilemma did.

- James hasn't top-lined a hit since Paul Blart three year and a half years ago and is still proving his ability as a solo draw.  His last two flicks were box office disappointments (The Dilemma and Zookeeper).
- With audiences saving money for the holidays and a fair amount of competition in the October market, this is the kind of movie that could easily be overlooked in theaters.
- James being in a more serious role (by his standards) is a tough sell, but there is also a chance that it might just interest his fans.

- A relatively well-known ensemble cast.
- In Bruges (which shared the same director) has a very dedicated fanbase, but on the other hand it isn't a very big one.

- The ensemble, however, isn't really made up of box office stars.
- Coming from the director of In Bruges, this R-rated comedy isn't likely to be everyone's cup of tea.
- Will have to deal with the direct competition from Argo, and likely will have to do so with a smaller location count.

Notable changes on our forecast this week include Premium Rush, Hit & Run and The Possession.  Additionally, The Apparition has been removed from the chart as Warner Bros. has decided to give it only a semi-wide release.