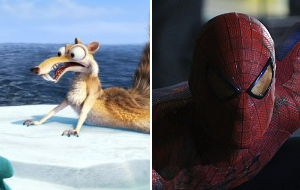 The latest entry in the Ice Age franchise is poised to steal away the #1 spot from Spider-Man at the box office this coming weekend.

With more than $200 million in the bank internationally, Ice Age: Continental Drift is already well on its way to becoming a massive hit. The Ice Age franchise does way more business abroad than it does at home. For proof, look at how 2009's Ice Age: Dawn of the Dinosaurs' made $687.1 million internationally compared to $196.6 million domestically. Still, domestic grosses are always important and Ice Age: Continental Drift should prove to be a steady earner. There's enough distance between Continental Drift and Brave, the most recent family-skewing flick, for families to be ready to go to the movies again.

Look for Ice Age: Continental Drift to grab $54 million from around 3,800 locations during its debut frame.

The Amazing Spider-Man should hold up well during its sophomore frame. Based on how quickly the Sony release passed $300 million worldwide, it's clear that moviegoers were ready for a reboot. TASM needs to make as much money as it can this week, because The Dark Knight Rises will steal away much of its audience next weekend.

The Amazing Spider-Man should take in $32 million this coming weekend.