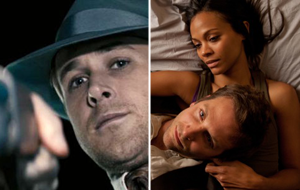 This week, we've added two new releases to our Long Range Forecast.  Gangster Squad and The Words are both currently set to release on Friday, September 7.

- A strong cast that includes Ryan Gosling, Sean Penn and Emma Stone.
- Moviegoers seem to be excited about the trailer, at least on the internet.
- The Town found great success two Septembers ago and this seems to cater toward a similar crowd.

- Drive didn't live up to its pre-release internet hype last year, at least in terms of being a break-out.
- Moviegoers may decide to wait for the more familiar choices of Finding Nemo 3D and Resident Evil: Retribution a week later (particularly the latter).

- Bradley Cooper proved to have drawing power with Limitless, although this doesn't feel as mainstream friendly as that film did.
- Zoe Saldana's presence could help some as well.  She previously helped Colombiana earn decent numbers.

- Will that many moviegoers want to see a film about plagiarism, regardless of who is in it, or how good it is?
- The trailer focuses heavily on the writing that takes place within the film.   Focusing more on the dramatic and thriller aspects of the film instead could be more beneficial.
- As mentioned, moviegoers may pass on this weekend in general as they wait for the following weekend's choices.

Notable changes on our forecast this week: The Dark Knight Rises.

Tags: Gangster Squad, The Cold Light of Day, The Words