Long Range Forecast: 'The House at the End of the Street', 'Dredd' & 'End of Watch' 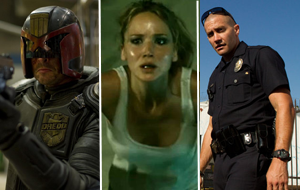 This week, we've added three new releases to our Long Range Forecast.  The House at the End of the Street, Dredd and End of Watch are all scheduled to open on Friday, September 21.

The House at the End of the Street

- The presence of Jennifer Lawrence, post-Hunger Games.   Daniel Radcliffe recently had post-Harry Potter success with The Woman in Black ($20.9 million opening).
- Should appeal to females and younger moviegoers much more than the weekend's other new releases.

- Arrives on the scene shortly after The Apparition and The Possession exit, so the audience might not necessarily be starved for another similar movie.

- Early reviews have been positive, which could help people forget about the 1995 film.
- Holding power could be better than normal for its genre as a result of reviews and word of mouth, although Looper opening the following weekend could prevent that.

- ...Not that many people saw the 1995 film to begin with, even when taking into account ticket price inflation.
- Dredd is a fringe character with hardly any mainstream recognition.
- Faces competition during opening weekend from End of Watch and the second weekend of Resident Evil: Retribution.

- Police dramas have a habit of performing better than expected, especially on opening weekend.
- Could prove to be the mainstream option between it and Dredd.
- Americans love patriotic films, as evidenced by the breakout status of this year's Act of Valor.

- This doesn't have the same level of star power that many previous police dramas have had.
- The level of competition from the weekend's other openers could prevent it from getting noticed upfront.

Notable changes on our forecast this week include The Bourne Legacy, Diary of a Wimpy Kid: Dog Days, Hope Springs, Lawless, Premium Rush and Total Recall.

Tags: Dredd, The House at the End of the Street, End of Watch