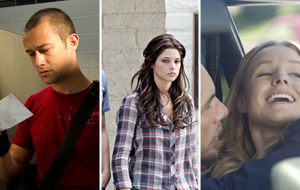 This week's new additions to our Long Range Forecast come in the form of Premium Rush, The Apparition and Hit and Miss.  All three films are currently scheduled to open on Friday, August 24.

- Likely to be the best of the weekend's three wide releases by default.
- Labor Day weekend should help its holding power.
- Levitt has a small and growing following of his own.

- Audiences won't be craving for another actioner of any kind for awhile after the glut of genre movies releasing before it in August.
- Pre-Labor Day weekend should add to the low upfront demand.

- Has the advantage of arriving one week before The Possession.
- There isn't much for the horror audience out there this summer, and the PG-13 rating plus Ashley Greene should draw some of the teen crowd.
- The Last Exorcism similarly broke out on opening weekend in August 2010 thanks to its teen-friendly rating.

- Warner Bros. and Dark Castle had poor results with Chernobyl Diaries.
- Audiences may wait for The Possession instead, especially given Lionsgate's successful history with the genre.
- Likely to be very front-loaded.

- Bradley Cooper and Kristen Bell add some name recognition to the release.

- Inspires the feeling of a film being dumped at the end of August.
- Cooper and Bell seem to take an apparent back seat to Dax Shepard.

Notable changes on our forecast this week include The Amazing Spider-Man, Katy Perry: Part of Me 3D, Savages, The Dark Knight Rises, The Campaign and The Bourne Legacy.