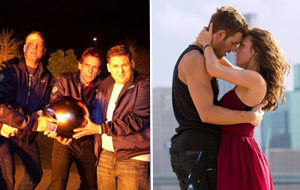 This week, we've added The Watch and Step Up Revolution to our Long Range Forecast.  Both films are scheduled to open nationwide on Friday, July 27.

- Vaughn, Stiller and Hill may be hit and miss individually, but together they could prove to be a strong draw.
- The Dark Knight Rises will still be dominating the market, but You, Me & Dupree opened to $22 million the week after Dead Man's Chest broke the opening weekend record in 2006.  In addition, Step Brothers managed to open to $31 million the week after The Dark Knight debuted in 2008.
- Jonah Hill is becoming more and more of a bankable comedic actor when given the right material and a strong supporting cast.  Coming off the success of 21 Jump Street can't hurt either.

- Expect this to be back-loaded as a result of The Dark Knight Rises and the Olympics opening ceremony combo.
- Despite the Step Brothers and You, Me & Dupree comparisons, its hard to discount the fact that The Dark Knight Rises will have some effect on this.
- The Campaign opening two weeks later could hurt its legs, especially with Ferrell & Galifianakis riding a slightly bigger wave of popularity than this film's cast at the moment (excluding Hill, perhaps).
- If Ted takes off at the end of June, it could dampen any demand for another comedy until August.
- Neither Vaughn or Stiller have had a hit in awhile.
- The lack of promotion so far (and title change) might be byproducts of the recent neighborhood watch-related shooting and controversy in Florida.

- These dance movies always have their own niche audience.

- The Step Up franchise switching studios provides a question mark.
- The law of diminishing returns has already set in with the franchise. The third film (despite a 3D price advantage) opened just under $16 million, and both the second and third films in this series dropped in ticket sales and un-adjusted revenue when it came to opening weekend and total gross.

Notable changes on our forecast this week include Prometheus, Madagascar 3, Rock of Ages, and Katy Perry: Part of Me 3D.

Tags: The Watch, Step Up Revolution