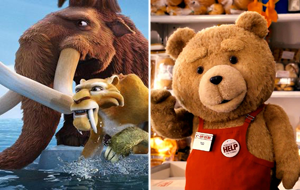 Ice Age: Continental Drift and Seth MacFarlane's Ted have been added to our Long Range Forecast this week.  Both films are currently scheduled to open nationwide on Friday, July 13.

- The first three films have been very consistent, pulling higher unadjusted grosses with each entry.
- July is devoid of any other animated or family movies, so staying power will be very strong.
- The third film surprised many with its $196 million gross during summer three years ago. Legs were solid, meaning reception was probably good enough to continue carrying the goodwill into this one.
- Opening weekend could be soft, but it should hold very well in the weeks after The Dark Knight Rises opens.

- Franchise fatigue inevitably sets in with live-action films.  Animated series aren't immune to it either.
- Being preceded by Madagascar 3 and Brave might remove some of the upfront demand, although having nearly one-third of the entire summer's family market to itself could negate this.
- Theater traffic may be subdued on this weekend coming off a major holiday weekend.
- The close proximity to The Dark Knight Rises could hurt it a bit more than the close proximity of Ice Age: Dawn of the Dinosaurs to Transformers: Revenge of the Fallen.

- MacFarlane has his fan base thanks to Family Guy and American Dad (mostly the former).
- There aren't many R-rated comedies out there this summer, especially for guys.
- Wahlberg is something of a draw.  Playing against type could also help out here.  The Other Guys helped his comedy credit and he could help this appeal to those outside the MacFarlane fan base.
- The extended footage brought the house down at CinemaCon, often a good indication of which comedies will do well.  This is a major contender for "sleeper" status.
- With The Dictator performing softly, and That's My Boy surrounded by "iffy" buzz, the audience for this could be absolutely starved come July.

- Despite having Wahlberg, getting this movie to appeal to women (or even mainstream audiences) is going to be a huge challenge.
- MacFarlane's fan base is untested at a theatrical level.
- Transitioning from television to movies is incredibly hard for some comedic performers.  See Trey Parker and Matt Stone's (of South Park fame) 1998 flop BASEketball and the mediocre performance of Team America: World Police.
- The Dark Knight Rises.  We've seen the effect that The Avengers had on its competition, and The Dark Knight Rises could bring more of the same.

Notable changes on our list this week include the upcoming Men In Black 3, Rock of Ages, and Savages.