Weekend Predictions: 'Think Like A Man,' 'The Lucky One' and 'Chimpanzee' 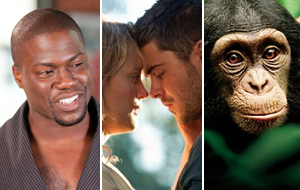 Think Like A Man is poised to finally push The Hunger Games out of the #1 spot at the box office this coming weekend.

Based on a popular book by Steve Harvey and aimed directly at under-served African-American demographics, Think Like A Man should manage a healthy debut frame. The star-studded cast includes Kevin Hart, Taraji P. Henson, Jerry Ferrara (Turtle on Entourage) and Chris Brown—a pro at generating negative publicity. This one can't miss.

As of 4 p.m. PT, Think Like A Man accounts for an impressive 35% of daily sales.

Look for Think Like A Man to take in $24 million from more than 1,800 locations during its debut frame.

Zac Efron stumbled a bit in 2010 with Charlie St. Cloud, but he's set to rebound with The Lucky One. It helps that Efron has author/screenwriter Nicholas Sparks in his corner. From The Notebook to The Last Song, Sparks is one the most bankable writers in all of Hollywood. Female moviegoers will not be able to resist the pairing of Efron and Sparks.

Fandango reports that The Lucky One accounts for 10% of daily sales.

The Lucky One should grab $21 million from around 3,000 locations.

Chimpanzee brings Disneynature back to the marketplace with another offering timed to Earth Day. Unfortunately, the Disneynature films have been dropping in popularity. 2010's Oceans made $19.4 million domestically and 2011's African Cats managed only $15.4 million. It doesn't look like Chimpanzee will reverse the trend.

Fandango reports that Chimpanzee accounts for 7% of daily sales.

Expect Chimpanzee to rake in a modest $6.5 million from around 1,500 locations.

Tags: Think Like A Man, The Lucky One, Chimpanzee