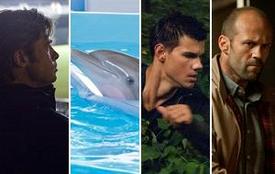 The Lion King 3D should have no problem fending off four newcomers at the box office this coming weekend.

Disney's The Lion King 3D is capitalizing on the fact that we're coming off a mediocre summer for films aimed at families. Parents need something to take young children to, and they know they are getting a good product with Lion King.

As of 3 p.m. PT, Fandango is reporting that The Lion King 3D is responsible for an impressive 34% of daily sales.

The Lion King 3D should manage $21 million during its sophomore frame.

Moneyball has a lot going for it: glowing reviews are calling Brad Pitt a serious Oscar contender, adults are clearly hungry for Oscar bait (see grosses for The Help and Midnight in Paris) and activity on Facebook and Twitter shows a lot of promise.

As of 3 p.m. PT, Fandango is reporting that Moneyball is responsible for 7% of daily sales.

Look for Moneyball to grab $19 million from more than 2,900 locations during its debut frame.

Dolphin Tale looks like it has the makings of a sleeper hit. The Warner Bros. release will represent a viable option for families who've already seen Lion King 3D.

Fandango reports that Dolphin Tale is responsible for 5% of daily sales. That number should increase on Thursday as more families plan for the weekend.

Dolphin Tale looks poised for $13.5 million from more than 3,200 locations during its debut frame.

Abduction represents a big test for star Taylor Lautner. Can he translate stardom gained from the Twilight franchise into a more diverse career? The answer right now is a resounding "maybe." Escaping the shadow of a huge franchise can be difficult—just ask Robert Pattinson,  Lautner's Twilight co-star. Pattinson stumbled big time in March 2010 with Remember Me, a tear-jerker that managed to open to only $8 million on its way to a domestic haul of $19 million. To be fair, Abduction will appeal to a much larger base than Remember Me. Action fans that wouldn't be caught dead watching Twilight may end up catching it.

Fandango reports that Abduction is responsible for a modest 3% of daily sales.

Expect Abduction to rake in $13 million from around 3,000 locations during its debut frame.

The exhibition community will be paying close attention to Killer Elite since it's the first relase from Open Road, a distribution company formed by AMC, Regal and Cinemark. Unfortunately, it looks as though the action flick will be overshadowed in a big way this weekend. While Killer Elite does boast star power, it's not the right kind of star power. Jason Statham has yet to have a blockbuster hit, Clive Owen is not a reliable draw and Robert De Niro has plenty of mainstream trust, but he doesn't sell tickets well outside of the Meet the Parents franchise these days. Expectations are modest at best.

Killer Elite has yet to make a dent on Fandango.

Look for Killer Elite to grab $9.5 million from around 2,700 locations.