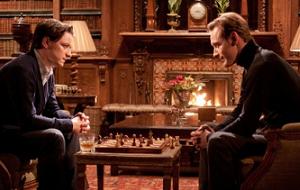 X-Men: First Class will have no problem fending off The Hangover Part II and Kung Fu Panda 2 in order to claim the top spot at the box office this coming weekend.

The X-Men franchise is certainly one of Marvel's most valuable properties. X-Men, X2, X-Men: The Last Stand and X-Men Origins: Wolverine have combined for more than $1.5 billion worldwide. 20th Century Fox now hopes that bringing on a new director, a new cast and starting from scratch with the storyline will breath life into the property in the same way that Warner Bros. was able to give Batman a boost.

The Last Stand certainly left a behind a bitter taste, which means that some fans may be a bit hesitant to put blind faith into a reboot. But if audiences agree with critics—First Class currently boasts a staggering 98% positive rating on Rotten Tomatoes—then it'll be able to stick around quite well in the weeks to come, making up for even a slightly underwhelming opening.

According to Boxoffice.com's WebWatch, X-Men: First Class currently leads all unreleased films with a 23.04% market share of online opinions. Transformers: Dark of the Moon ranks second with 13.06%.

The superhero flick's Facebook activity leaves something to be desired. The official X-Men page has tacked on nearly 6,000 new likes since early Monday morning for a total of around 2.5 million. That's a slow increase for a new blockbuster, but it's not cause for a huge amount of concern since the base is already so massive. On Twitter, X-Men: First Class is actually outpacing Thor.

As of 4 p.m. PT, Fandango.com is reporting that X-Men: First Class is responsible for an impressive 21% of daily sales. That number should see a slight bump on Thursday as attention moves away from The Hangover Part II.

Look for X-Men: First Class to take in $69 million from around 3,400 locations during its debut frame.

The Hangover Part II is a prime example of a critic-proof film—moviegoers aren't phased by the fact that reviewers have ripped the raunchy sequel to shreds. The Facebook page for The Hangover has tacked on more than 447,000 new likes since early Friday morning, which represents the biggest increase of the summer. Nearly 45,000 Flixster users have combined to give Part II an incredibly healthy 94% approval rating.

Fandango is reporting that The Hangover Part II leads daily sales with 31%. That lead is likely to end later in the week as X-Men: First Class inevitably surges.

Expect The Hangover Part II to take in $37 million during its sophomore frame.

Kung Fu Panda 2 was overshadowed in a big way by The Hangover Part II last weekend, but the smart money says that the animated flick will have a better multiplier during its domestic run. The fact that X-Men: First Class is mostly aimed at teens and twentysomethings helps KFP2 remain the strongest option for families this weekend.