Weekend Predictions: 'Season of the Witch' 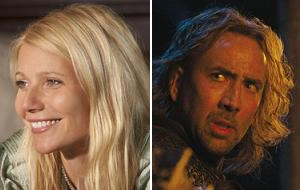 Country Strong and Season of the Witch will be no match for the likes of True Grit and Little Fockers during the first full weekend of 2011.

True Grit is showing amazing staying power and it's the favorite to claim the top spot during its third weekend in theaters. The Coen Brothers now have the first serious blockbuster of their careers, and the Western will easily reach the $100 million plateau this coming weekend.

As of 3 p.m. PT, Fandango.com is reporting that True Grit leads daily sales with a healthy 12%. The King's Speech and Black Swan are tied for second with 8% each.

Look for True Grit to manage $16.5 million during its third frame.

Little Fockers is fading quicker than its predecessors, but it's still a decent earner for Universal. If word-of-mouth was slightly better, the comedy would have no problem staying #1 for the third weekend in a row. Unfortunately, Little Fockers has a mediocre 53% approval rating from nearly 85,000 user reviews on Flixster.

Fandango is reporting that the sequel is responsible for only 7% of daily sales as of 3 p.m. PT.

Country Strong will try to entice country music enthusiasts to head out to theaters. Unfortunately, star Gwyneth Paltrow is far from a huge draw these days, which means that the film will need to rely mostly on word-of-mouth in order to have a successful theatrical run. The Screen Gems release has already raked in a promising $129,432 from two locations since opening on December 22.

Country Strong's Facebook activity isn't all that encouraging for a film that's bound to skew heavily female. The film's most active page boasts nearly 50,000 fans. That's on par with the 45,000+ supporters that The Switch had on the Wednesday before hitting theaters. The Jennifer Aniston vehicle opened to $8.4 million. On Twitter, Country Strong isn't even in the top 20 list of most tweets.

Fandango is reporting that Country Strong has yet to crack their top 5. However, that could change on Thursday as more moviegoers plan for the weekend.

Expect Country Strong to rake in $8.5 million from more than 1,500 locations.

Season of the Witch looks poised to be yet another Nicolas Cage dud. According to BoxOffice.com's most recent WebWatch report, Season of the Witch has only a 4.35% market share of opinions among unreleased films. That's far from a blockuster-caliber share.

Facebook activity doesn't provide much reassurance for Season of the Witch's potential. The Relativity release boasts nearly 48,000 fans, which is not a high number for a film that is bound to hit the male 18-34 demographic. On Twitter, Season of the Witch is trailing the likes of Robin Hood, The Sorcerer's Apprentice and Daybreakers.

Look for Season of the Witch to rake in an underwhelming $7.5 million from around 2,500 locations during its debut frame.