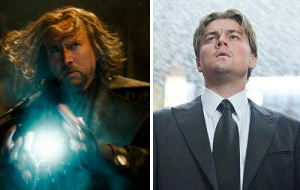 Thursday Update: Check out our final weekend predictions in the table at the bottom of this entry.

Wednesday Update: Even though the duo of Jerry Bruckheimer and Nicolas Cage is usually dynamite at the box office, a Christopher Nolan/Leonardo DiCaprio pairing will claim the top spot from Despicable Me this weekend.

While a Wednesday release may help The Sorcerer's Apprentice build up some buzz before the Inception juggernaut hits theaters, a lot of signs point to a general lack of interest in the Disney release.

According to the most recent BOXOFFICE WebWatch report, The Sorcerer's Apprentice holds only a 3.33% share of online opinions among unreleased films, which puts it well behind Inception's dominant 28.49% share. It even ranks behind late-July releases such as Salt and Charlie St. Cloud.

As of 3 p.m. PT, Fandango.com is reporting that Sorcerer's Apprentice is responsible for 23% of daily sales, which puts it in second place behind Despicable Me at 26%. It's not a good sign that Jerry Bruckheimer's latest production wasn't able to overtake Universal's animated flick on its first day of release.

The Sorcerer's Apprentice looks poised for a five-day haul of $32 million and a weekend take of $22 million from around 3,385 locations.

Riding into theaters on a wave of a glowing reviews and helped by a creative marketing blitz that doesn't give away key details, Inception is being viewed as a kind of savior for a summer full of disappointing sequels and lame attempts to build new franchises. While hard-core movie fans are certainly responding, a decent amount of casual moviegoers may still be on the fence about Christopher Nolan's mind-bender. Most critics are quick to point out that Inception demands a lot of attention and analysis from its viewers and that's not a common trait for a summer blockbuster. Inception does promise plenty of great action set pieces, but its dense nature is bound to turn off patrons looking for mindless thrills.

Fan support for the Warner Bros. release on Facebook is nothing spectacular, but its presence on Twitter is truly astounding considering that only the likes of Iron Man 2 and The Twilight Saga: Eclipse spawned more activity this summer.

As of 3 p.m. PT, Fandango is reporting that Inception is responsible for 21 percent of daily sales. A solid number to be sure, especially for a film that is bound to appeal to older audiences.

Look for Inception to start its theatrical run with $65 million from around 3,700 locations.

After a surprisingly strong debut, Despicable Me should hold up quite well. The Steve Carell vehicle boasts a healthy 71% approval rating on Flixster and its grosses on Monday and Tuesday were excellent.

Expect Despicable Me to tack on another $32 million to its already impressive haul.