Long Range Forecast: 'Going the Distance' and 'The Last Exorcism' 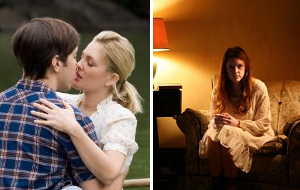 This week, we've added two new films to the Long Range Forecast. Going the Distance and The Last Exorcism are both scheduled to hit theaters on August 27.

After a summer full of explosions, car chases and fight scenes, Warner Bros. is hoping that audiences will be looking for a simple romantic comedy when they send out Going the Distance. Stars Drew Barrymore and Justin Long have been linked romantically in real life, so that should give the flick a nice publicity angle. Meanwhile, supporting players Jason Sudeikis and Charlie Day (It's Always Sunny in Philadelphia) should help make male viewers less hesitant to use it as a date night option.

Summer 2010 hasn't exactly been full of horror flicks, so The Last Exorcism could end up bringing in its share of fright-fest junkies. Since Exorcism lacks real star power, the trailer and the premise need to catch on in a major way.

Check out our predictions for those films as well as others in the table below: