The third weekend of August is going to be quite crowded 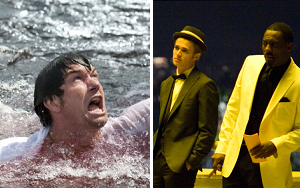 With such a rush of new releases, it's hard to imagine that any one film will be able to break out from the pack. Plus, they all will have to compete with holdovers such as Scott Pilgrim vs. the World, Eat Pray Love and The Expendables, which appear to be headed for solid openings.

Piranha 3D looks like campy 3D fun, and it could bring in a fraction of the audience that went to see Final Destination 3D last August.

Swith star Jennifer Aniston is far from a sure thing at the box office, and co-star Jason Bateman doesn't provide the support she usually needs from a reliable leading man.

Nanny McPhee Returns is already a solid international success, but it can expect only modest returns in the states. The property is simply not a big domestic draw.

Takers and Lottery Ticket both have famous rappers in their casts: T.I. and Chris Brown headline Takers and Ice Cube and Bow Wow star in Lottery Ticket. Lottery Ticket will skew younger, while Takers will be a nice option for moviegoers who like gritty heist flicks.

Vampires Suck could benefit from a bit of Twilight fatigue, but its prospects are limited since the spoof genre is running on fumes these days.