UPDATED: Weekend Predictions: 'Sex and the City 2' and 'Prince of Persia: The Sands of Time'

A sequel to the queen of all chick flicks and a video game adaptation will square off over the Memorial Day weekend. 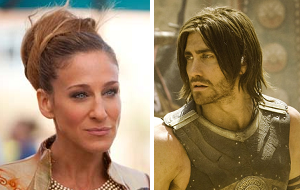 Wednesday Afternoon Update: Carrie Bradshaw and Co. are poised for a confident victory over Disney's action/adventure flick during the four-day holiday frame.

Sex and the City 2 is being unleashed upon theaters two years after the original film mobilized the fan base to the tune of more than $400 million worldwide. Sex and the City opened on May 30, 2008, and it was able to rake in an impressive $57.0 million domestically. Look for SATC 2 to top that number, since two years is plenty of time for a property like SATC to build up its following.

Fandango.com reports that SATC 2 is "slightly outpacing" the original at the same point in the sales cycle, which is a sign that the new film should post a modest increase over the first installment. Meanwhile, MovieTickets.com is reporting 597 sold-out shows. SATC 2 accounts for 85 percent of daily sales on Fandango and 83 percent on MovieTickets, and that's pretty impressive considering that online sales for The Twilight Saga: Eclipse have been dominating both sites.

According to BOXOFFICE's WebWatch data, SATC 2 registered 42,504 online opinions from the period of May 20-May 26, which gives it an impressive 19.23 percent market share. Only The Twilight Saga: Eclipse outranks SATC 2 among unreleased films.

SATC 2 has been posting solid levels of activity on both Facebook and Twitter. SATC 2's most active Facebook page is experiencing drastic jumps in its fan count all week, and tweets are coming in at a steady pace.

Look for SATC 2 to start off with $19 million on Thursday before raking in another $60 million over the four-day frame. The Warner Bros./New Line release will open at more than 3,400 locations.

While ladies go with their friends to see SATC 2, boyfriends and husbands will catch Prince of Persia: The Sands of Time. Disney is obviously trying to tap into the same audience that went nuts for the Pirates of the Caribbean and Mummy films, which is certainly a good goal to have. It will also help that Prince of Persia is based on a popular video game.

"Prince of Persia is very strong with under-25 males, and older males--whose support seemed to softened considerably a few weeks back--are still showing quite a lot of interest," says Flixster spokesperson John Singh when discussing activity on the popular website.

Still, with all it has going for it, Prince of Persia is not generating a whole lot of momentum. In terms of web activity, it hasn't been showing much growth on Facebook or delivering an overwhelming amount of tweets, and it ranks slightly behind SATC 2 in WebWatch data with an 18.90 percent market share.

As of 3 p.m. PT, Prince of Persia only accounts for two percent of daily sales on Fandango.com.

Prince of Persia should rake in $45 million over the four-day period from 3,500 locations.

After opening to an underwhelming $70.8 million, Shrek Forever After will try to save face during its sophomore frame. Shrek 4 should be able to keep a dominant hold on family audiences since Prince of Persia isn't as family friendly as other Disney films.

Look for Shrek Forever After rake in $50 million over four days.

Check out our Four-Day Top 10 Predictions in the table below.

Tags: Sex and the City 2, Shrek Forever After, Prince of Persia: The Sands of Time, Iron Man 2, Robin Hood, Letters to Juliet, Just Wright, MacGruber, Date Night, How to Train Your Dragon