BOXOFFICE Forecast: 'Despicable Me' and 'Predators'

Despicable Me and Predators will try to do some damage this July. 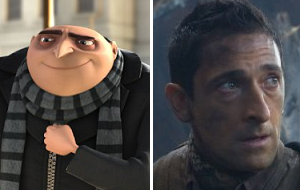 This week, we've added Despicable Me and Predators to the BOXOFFICE Forecast. Both films are set to open on July 9.

Universal enters the world of 3D animation with the help of all-star voice cast anchored by Steve Carell. Carell is coming off of the success of Date Night, a comedy that struck a chord with adult moviegoers. That means parents won't moan and groan as much when their kids bug them to go see Despicable Me. Unfortunately for Universal, this effort has little chance of beating such established properties as Toy Story 3 and Shrek Forever After in terms of worldwide, or even domestic, box office grosses.

Action enthusiasts and fans of the Predator franchise will help provide a modest opening for the latest in a long string of reboots. The main factor that may keep Predators from making some serious bank is the fact that it doesn't boast any real blockbuster stars. Adrien Brody, Topher Grace and Alice Braga are fine character actors, but they won't even come close to providing a built-in audience.

Tags: Toy Story 3, Shrek Forever After, The Twilight Saga: Eclipse, Sex and the City 2, The A-Team, Prince of Persia: The Sands of Time, The Last Airbender, Knight and Day, Grown Ups, Despicable Me, The Karate Kid (2010), Marmaduke, Predators, Get Him to the Greek, Jonah Hex, MacGruber, Killers