BOXOFFICE Forecast: 'The Twilight Saga: Eclipse' and 'The Last Airbender'

The Twilight Saga: Eclipse and The Last Airbender promise to do some serious damage this summer. 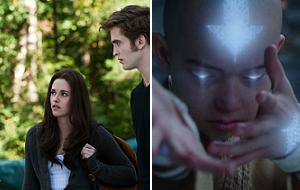 This week, we've added The Twilight Saga: Eclipse and The Last Airbender to our Anticipation Index. Eclipse hits theaters on June 25, while Airbender opens on July 2.

The smart money is on Summit's latest installment in the Twilight series emerging as one of the summer's biggest successes. Just do the math. Twilight opened to $69.6 million in November 2008, and New Moon jumped to a $142.8 million opening in November 2009. The franchise is growing at a rapid rate and it may not peek until its fourth and (probably) final film, which will be released in two parts. Summit is wise to release the film in the summer since its rabid teenage fanbase won't have to worry about school. Expect this one to break records.

Eclipse's official opening weekend tally will be watered down considerably due to the fact that it is opening on a Wednesday. With that said, the film's five-day opening total should clock it around $190 million.

M. Night Shyamalan takes a break from his typically moody thrillers to deliver what could be the beginning of a popular franchise for Paramount. Teenage boys who wouldn't be caught dead in a theater showing Eclipse will be the base for this. While domestic numbers will be healthy thanks to a built-in fan base that comes from the Nickelodeon show, Airbender's international cast will help it perform much better abroad.

Check out our predictions for The Twilight Saga: Eclipse and The Last Airbender as well as other films in the table below.

Tags: Toy Story 3, Shrek Forever After, The Twilight Saga: Eclipse, Sex and the City 2, The A-Team, Prince of Persia: The Sands of Time, The Last Airbender, Robin Hood, Knight and Day, Grown Ups, The Karate Kid (2010), Marmaduke, Get Him to the Greek, Jonah Hex, Killers, MacGruber, Letters to Juliet