Toy Story 3 and Jonah Hex will be aiming for different moviegoers when they open this June. 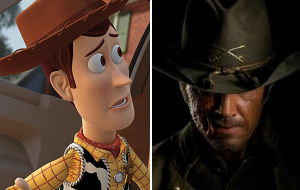 This week, we've added Toy Story 3 and Jonah Hex to our Anticipation Index. Both films are set to hit theaters on June 18.

Disney/Pixar return to the property that helped launch their incredibly fruitful relationship with Toy Story 3, and their latest effort will be welcomed with open arms by moviegoers of all ages. Just because fans of the original films are older now doesn't mean they won't show up for the new installment. In fact, some of them will have the unique pleasure of taking their children to see the new film. The Disney/Pixar name means fun action scenes for the kids and undertones for the adults to enjoy. This one will be in serious contention for the biggest domestic earner of the summer.

Even though it will appeal to a different crowd than Toy Story 3, Jonah Hex will be seriously overshadowed by Woody, Buzz and Co. Add to that the fact that stars Josh Brolin and Megan Fox have yet to show they can carry a movie on their own and you have what is shaping up to be one of the summer's biggest duds. Warner Bros. will need to put a lot of marketing muscle behind the film in order to get people to show up. Do not expect a franchise to be born.

Check out our predictions for Toy Story 3 and Jonah Hex as well as other films in the table below.

Tags: Iron Man 2, Shrek Forever After, Toy Story 3, Sex and the City 2, The A-Team, Prince of Persia: The Sands of Time, Robin Hood, A Nightmare on Elm Street (2010), The Karate Kid (2010), Marmaduke, Get Him to the Greek, Killers, Jonah Hex, MacGruber, Letters to Juliet, Furry Vengeance