Early Weekend Predictions: 'Edge of Darkness,' 'When in Rome' and 'Avatar'

Edge of Darkness and When in Rome will try to take away some of Avatar's momentum this weekend. 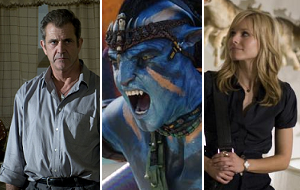 Mel Gibson's return to acting and Kristen Bell's attempt at obtaining leading lady status are going up against the Na'vi at the box office as January comes to an end. Yet even with two new films to compete with, it looks as though Avatar will finish in first place for the seventh weekend in a row.

Cameron's flick is a shining example of the kind of staying power that blockbusters used to have. If Avatar's performance is any indication, 3D technology may go a long way in helping make patrons more likely to see a movie multiple times in theaters instead of rushing out opening weekend and then waiting for DVD/Blu-ray.

Avatar should be able to post a healthy $29 million this weekend.

Edge of Darkness represents something of a gamble on the part of Warner Brothers. If Mel Gibson's drawing power has dropped too much since 2002's Signs, then Darkness could prove to be an expensive dud. Luckily, Gibson's latest is a revenge flick, and that's a popular genre as of late. Taken and Law Abiding Citizen were both able to post healthy numbers by allowing audiences to work out their aggression vicariously. If the resent surge in popularity holds, then Darkness could be a hit because of its subject matter rather than its star.

The revenge flick boasts two percent of daily sales on MovieTickets.com as of 4 p.m. PT. That number is bound to go up slightly as more moviegoers begin to plan for the weekend on Thursday.

Edge of Darkness should open to $24 million from more than 3,000 locations.

When in Rome may have the Disney name behind it, but star Kristen Bell hasn't reached a level where she's recognizable enough to carry a movie on her own. Bell delivered scene-stealing supporting turns in Couples Retreat and Forgetting Sarah Marshall, but that doesn't necessarily equate to the kind of box office clout that is needed to open a film. Still, When in Rome should manage to find a niche among young females viewers who won't be interested in watching Mel Gibson avenge the death of his daughter.

Online signs point to an opening for When in Rome that may resemble another January release aimed at female moviegoers.

"Traffic for When in Rome is really similar to the recent Leap Year, and it's not a surprise that young females are forming the bulk of the audience interest," says John Singh, a spokesperson for Flixster. According to Flixster's activity, interest levels from women are five times higher than from males.

Leap Year debuted to $9.2 million, but it is being pushed out of theaters pretty quickly.

Expect When in Rome to rake in $9.5 million from around 2,200 locations during its debut frame.

It will be interesting to see how To Save a Life holds up this weekend even though it probably won't end up in the top five. Flixster is reporting that post-opening activity and trailer views jumped a combined 633 percent for the faith-based flick. The IDP/Samuel Goldwyn release grabbed $1.5 million from only 441 locations last weekend, and it could become a big grassroots hit in the weeks to come.