Couples Retreat and Zombieland will both try to make moviegoers laugh this October. 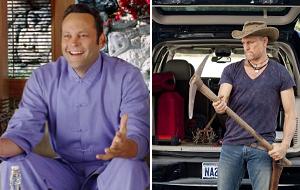 This week, we've added Couples Retreat and Zombieland to our Weekly Anticipation Index.

Universal is set to release Retreat, which marks a reunion of Swingers stars Vince Vaughn and Jon Favreau, on October 9. While Favreau has been spending his days behind the camera recently on the Iron Man franchise, he's still a recognizable presence in front of the camera as well. Audiences will feel comfortable watching the two actors play off each other once again. As for Vaughn, he's still very much a major box office draw. Last November, Four Christmases grabbed $120 million domestically during the typically competitive fall season. Backing up Vaughn and Favreau is an impressive supporting cast that includes Jason Bateman ( Hancock, State of Play ), Kristen Bell ( Forgetting Sarah Marshall ) and Kristin Davis ( Sex and the City ). With a plot that centers around struggling married couples vacationing on an island, Retreat should be able to entice legions of adult moviegoers.

Woody Harrelson and Jesse Eisenberg are teaming up for Zombieland, a comedy in the same vein as Shaun of the Dead. There's always room for a satire of zombie films, and the Sony release should find a decent audience among horror aficionados and moviegoers looking for a good laugh.

Check out our predictions for those film as well as many others in the table below.