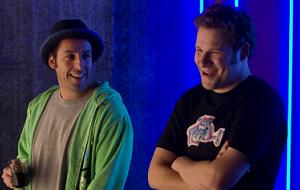 This week, B OXOFFICE has added Funny People to our Weekly Anticipation Index.

The Universal release marks the third time that comedy kingpin Judd Apatow has stepped behind the camera. After directing 2007's Knocked Up, Apatow served as a producer on a string of successful ( Superbad, Step Brothers, Pineapple Express ) and not-so-successful ( Walk Hard: The Dewey Cox Story, Drillbit Taylor ) flicks. Now, with Funny People, he'll try to build on the success of Knocked Up, which grossed an impressive $148.8 million domestically–$155.3 million when adjusted for inflation.

The fact that Apatow has Adam Sandler and Seth Rogen by his side this time around can't hurt. Sandler's comedies consistently gross $100 million, and his most recent efforts were Bedtime Stories, which grossed $110 million domestically during the crowded holiday season last year, and You Don't Mess With the Zohan, a comedy that barely crossed the $100 million plateau.

Rogen is coming off the failure of Observe & Report, so he'll need Funny People to be a hit. Audiences just didn't get the dark humor of O&R, and the Warner Bros. release has brought in only $23.8 million since opening in March.

While the combination of Sandler and Rogen guarantees a solid opening, Funny People reportedly has a bittersweet tone that may turn off moviegoers who are simply looking for summer escapism. As a result, Apatow's latest could have trouble maintaining its audience after the opening weekend.

Check out prediction for Funny People and other summer blockbusters in the table below.