Weekly Anticipation Index: 'Year One' and 'The Proposal'

During a comparatively slow weekend, Jack Black is going to face off against Sandra Bullock at the box office this June. 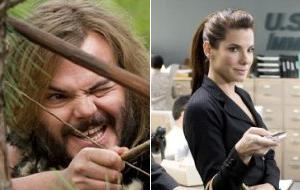 With the summer movie season just around the corner, BOXOFFICE has added two radically different new films to our Anticipation Index.

Compared to other weekends this summer, it looks as though the weekend of June 19 will be relatively calm. Both Year One and The Proposal should post respectable numbers, but they won't be $200 million hits by any means.

Year One star Jack Black is coming off a strong year in 2008. The comedic actor had two hits last summer, Kung Fu Panda and Tropic Thunder. Panda grossed a staggering $215.4 million domestically after opening in June, while Thunder was a hit in August with a domestic haul of $110.5 million.

Still, the best point of reference for Year One may be Black's 2006 effort Nacho Libre. The comedy opened on June 16, and it brought in $28.3 million domestically ($31 million when adjusted for inflation) during its opening frame before going on to gross a total of $80.2 million. Black's off-the-wall humor seems to be exactly the kind of thing that mainstream audiences are looking for during the summer months.

One potential hazard for Year One is the fact that another comedy kingpin, Will Ferrell, is starring in Land of the Lost, another fantasy-themed flick, which opens on June 5. Audiences that already saw Lost may experience a little déjà vu when deciding whether or not to catch Year One.

Even though they aren't the most bankable stars in the world, the presence of Sandra Bullock and Ryan Reynolds in The Proposal should help the film open to decent numbers, even though it most likely won't top Year One.

Bullock's films tend to have very strong staying power. For instance, her 2002 romantic comedy Two Weeks Notice, in which she starred opposite Hugh Grant, opened with $14 million domestically ($17.7 million adjusted) before finishing its run with $93 million ($115.5 million adjusted). However, the fact that Cameron Diaz's new film, My Sister's Keeper, is opening the following weekend will probably slow down Proposal since crucial female demographics will flock to Keeper.

Even though Proposal seems to be full of every rom-com convention in the book, Reynolds may entice male audiences to give it a try. Thanks to his presence in Adventureland and X-Men Origins: Wolverine, Reynolds is having a solid year and Proposal could help him keep up that momentum.

This week we've also boosted our expectations for Star Trek after the recent rush of glowing reviews . It appears that director J.J. Abrams has a made a film that will bring in a new generation of fans.

See our predictions below.