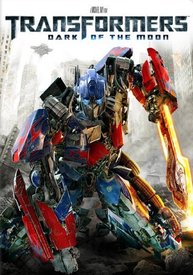 Director Michael Bay didn‘t have to listen to the legion of film critics who found the second film in his Transformers series, Revenge of the Fallen, an incomprehensible mess.

Instead, Bay took their misgivings to heart while making Transformers: Dark of the Moon. Yes, the signature Bay flourishes are ever-present in the third Transformers film, from the juvenile dialogue to humans less three-dimensional than the battling ‘bots. But Bay's delivers clear-eyed action in the film's stunning third act that pummel critical faculties to a pulp.

Sam Witwicky (Shia LaBeouf) no longer works side by side with the benevolent Autobots, but that changes when scientists discover a forgotten Autobot named Sentinel Prime (voiced by Leonard Nimoy) on the surface of the moon. The robot's return to Earth changes the dynamics of the ongoing Autobot/Decepticon war, dragging Sam back into the action anew.

The Blu-ray Dark of the Moon arrives sans extras, a suspicious move given the complexity behind the film and the franchise's geeky fan base. Expect an upgraded release down the not so short road brimming with the kind of goodies this version should have included.

The Lion King: Diamond Edition arrives on Blu-ray on the heels of its triumphant return to theaters this month. The theatrical model may be enhanced by 3D technology, but all this 1994 neo-classic needs is a heaping helping of "Hakuna Matata."

The traditionally animated tale follows an adorable lion cub's ascent to his rightful place as the king of his kingdom. But his journey is marred by the death of a parent—a Disney staple—and the presence of his nefarious Uncle Scar (Jeremy Irons).

A few of Lion King's musical numbers aren't as toe-tapping as we remember, but the unforced animation and perfect vocal casting remain highlights unblemished with time.

The Blu-ray extras include Disney Second Screen (a computer app which syncs extra material with the film), a backstage look at the film's creation and, best of all, bloopers and outtakes. The latter pieces together audio outtakes from the original film with new animation made by some of the film's original crew.

It's a brilliant spoof of Blu-ray bloopers in general and a chance to watch Mufasa (James Earl Jones) run through some majestic vocal exercises. And if you think Hakuna Matata is easy to say, just ask Matthew Broderick who can't stop stumbling over the now iconic phrase.

"I don't speak this African stuff," he murmurs.

New Decade. New Rules. So declared the tag line for Scream 4, the latest chapter in what Hollywood hoped would be a resuscitated horror franchise. But the genre hasn't changed over the past 10 or so years, and there's little in the new Scream to merit its existence.

A new Ghostface is back to stalk poor Sidney Prescott (Neve Campbell) when she returns to her hometown to promote a book about her unique survival skills. Returning Scream team David Arquette and Courteney Cox do all they can to protect her, but the killer ends up offing a number of nubile young teens along the way.

Director Wes Craven remains a sturdy craftsman, and Scream 4 never bores us like Craven's last atypical effort, My Soul to Take. But watching Arquette, Campbell and co. running from the latest version of Ghostface is a dispiriting experience all the same. The original Scream broke the mold with alacrity. The new model is simply content to riff on a franchise better left buried.

The home video extras include a commentary track with Craven, new Scream cast mates Hayden Panettiere, Emma Roberts and Campbell, plus deleted and extended scenes and a goofy gag reel. Yes, even actors get scared on the set of horror movies.

"The Making of Scream 4" lets cast and crew pontificate on the need for this franchise extender and how the reunited cast is akin to family. For the newbies, it was a chance to join one of horror's more profitable franchise. Others simply wanted to get their scream on at long last.

"It's something I always wanted to do, but it had to be the right one," Panettiere says of her first horror film.

Any skepticism the quirky coming of age drama Submarine inspires is quickly wiped clean by the pure performance of its teenage lead. Young, sad-eyed Oliver Tate (Craig Roberts) is trying to survive his teen-age years despite his oddball status. He's smitten with a complicated classmate (Yasmin Paige) and in mortal fear his parents are heading for a divorce.

Director Richard Ayoade uses a variety of film tricks to set Submarine apart from its coming of age peers, like exaggerated slow motion, and nearly every gimmick works as intended. But the film's fiendishly comic beginning fades when the focus shifts to Oliver's parents and the goofy spiritualist (Paddy Considine) who may be wooing his mum (Sally Hawkins).

It's an unremarkable tale told with realism and wit, and even though Submarine doesn't deliver on its own promise it's a worthy addition to the coming of age film canon.

The Blu-ray edition comes with nine deleted and extended scenes and a straightforward "Making Of" feature .

Ayaode says he's drawn to films like The Graduate and Harold and Maude, flickers of which dance throughout Submarine if one looks closely enough. But the director says what really attracted him to Oliver's story was the meanness the character displays alongside his more gentle moments.

"You are very selfish when you're that age," he says.