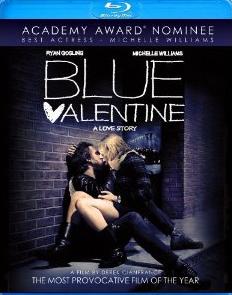 Blue Valentine could be the worst first date movie possible, but it's also one of 2010's most impeccably crafted films.

Ryan Gosling and Michelle Williams play a couple on the cusp of separation. It's not clear initially why they've grown apart, and the film flashes back repeatedly to the early days of their courtship to show how these two different souls first connected.

Films routinely capture the ungainly moments of first love, but Blue Valentine shines when it reveals how love can wilt even without something drastic like infidelity or money woes.

Gosling and Williams create a wholly believable couple, simultaneously burnishing their credentials as two of the best young actors on screen today.

The Blu-ray extras feature a standard blend of audio commentaries and behind the scenes snippets. But the most intriguing feature is a faux home movie segment with the leads hamming it up for their on-screen daughter. It's as relaxed and real as every other aspect of the film.

The "making of" featurette has director Derek Cianfrance recalling the two biggest fears from his childhood—nuclear war and his parents getting a divorce. The latter actually happened when he turned 20, and he realized he'd have to deal with it someday through his art.

"I needed to confront those things that scared me as a kid," he says.

Sean Bean looks like he was born to wield a broad sword. The co-star of the Lord of the Rings film headlines Black Death, a slick spin on the bubonic plague which wiped out roughly half of Europe's population in the 1300s.

Bean plays Ulric, a holy warrior chose by the Church to investigate a town mysteriously untouched by the plague. Ulric is joined by Osmond (Eddie Redmayne of TV's Saving Grace), a monk whose feelings for a local woman cause him to question his own faith.

The two lead an expedition that turns out to be far more dangerous than expected.

Black Death casts a skeptical eye on religious fanaticism of all stripes, but a third act twist brings a healthy of sense of balance to that cynicism. Both Bean and Redmayne excel as polar opposites who learn to trust each other under dire circumstances.

The Blu-ray extras include deleted scenes, interviews with cast and crew, behind the scenes footage and "Bringing ‘Black Death' to Life." The latter includes the usual on-set pandering but also reveals some fun quirks about director Christopher Smith. When a scene clicks, or a daily suits his fancy, he cackles like a child. Smith howls even when the scene in question is grisly and dark, which is often the case throughout "Death."

The 1992 action film Supercop let Jackie Chan revisit his Police Story character for a third time. But Chan handed over the directorial reigns to Stanley Tong, the man who would help Chan enter the U.S. market three years later with Rumble in the Bronx.

Watching Supercop today makes it clear why stateside audiences would soon stand up and cheer for Chan. But the film's broad comedic elements and patchy storytelling nearly overwhelm the star's physical prowess.

The film stuffs plenty of action into its lean 91 minute running time, but the standout sequence finds Chan's character dangling from a helicopter without any CGI to protect him. It's pure Chan—daring, outrageous and compelling.

Supercop's outsized gags might earn a smile or two, but the film feels like a parade of hastily arranged genre parts. Chan and Yeoh work well together, but couldn't the script have given them a few juicy one-liners to spice up the proceedings?

The only Blu-ray extra is a chatty interview with co-star Yeoh. We learn she started out dancing ballet with no real ambitions to become a martial arts expert, but every time a role called for fists of fury she learned enough to land the part. Add up all those roles, she explains, and suddenly she became a go-to action heroine.

Arnold Schwarzenegger's breakthrough 1984 hit The Termintor hits Blu-ray this week along with handsome book-style packaging and some pretty moldy extras.

The erstwhile Governator's turn as an unstoppable killing machine from the future remains a sci-fi hallmark. Co-writer/director James Cameron parlayed a modest budget and a monosyllabic star into a bracing look at our fear of technology.

Linda Hamilton plays Sarah Connor, the woman destined to give birth to a soldier who will rally humanity against the machines in the 21st century. Michael Biehn co-stars as the future fighter who travels back in time to protect Sarah from a Terminator (Schwarzenegger), a soulless cyborg programmed to extinguish Sarah and, indirectly, her progeny.

Cameron's terrific 1991 sequel ups the ante on the action and special effects, but "The Terminator" delivers timeless thrills despite an abundance of shoulder pads and ‘80s hair.

The extras held over from previous home video releases include seven deleted scenes, "Creating 'The Terminator: Visual Effects & Music" and "Terminator: A Retrospective." The latter teams Schwarzenegger and Cameron who discuss how each itched to cast the former bodybuilder as the bad guy, but politely discussed Schwarzenegger for Biehn's role initially.