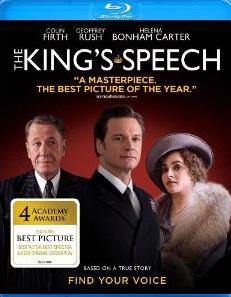 The King's Speech earned its Best Picture Oscar the right way, by delivering a timeless story of a man overcoming obstacles with the help of others. An assist from the film's salesman/producer, Harvey Weinstein, didn‘t hurt.

Colin Firth won an Oscar all his own as Albert, the royal next in line for the crown. But Albert harbors a secret that makes every public appearance a nightmare. He has a terrible stutter, and the best and brightest minds in England can't seem to help it.

Enter Lionel Logue (Geoffrey Rush), an unorthodox speech therapist who insists he's the only one who can untie Albert's tongue. The two clash at first, their divergent social standings as much to blame as their bullheadedness. Slowly, they realize they need each other to give voice to the future King of England.

The King's Speech may be conventional to its core, but a story this well told—and acted—is always in short supply. Firth and Rush mesh beautifully, their complicated relationship forging the film's oversized heart.

The extras include a commentary track with director Tom Hooper, speeches from the real King George which show the fidelity of Firth's performance, plus an interview with Lionel Logue's grandson. Mark Logue reveals how he first came into possession of his grandfather's diaries and how he didn't start to delve into them until the producers behind the movie came calling for more research.

The Way Back reminds us of the indomitable human spirit, a force that can carry men across thousands of miles for a taste of freedom. Director Peter Weir's film, inspired by real events, tells the story of seven prisoners of a World War II-era Soviet gulag who escape only to find themselves in even more inhospitable terrain—Siberia.

They have little food or supplies, and the howling wind and snow threaten to end their journey before it's begun. But the hearty band carries on all the same, putting aside cultural differences in order to survive.

Weir captures every detail possible, from the horrors of the gulag to the punishment meted out first by snow and, later, by an unflinching sun. The film earned a Best Makeup Oscar nomination for its realistic depiction of how the elements batter our heroes. But the film fails to make these prisoners come alive. Only Ed Harris as the group's elder statesman leaves a fiery impression. Colin Farrell flashes hate as the prisoner who actually should be confined in some capacity, but the character isn't developed enough to matter.

It's an epic film all the same, a harrowing glimpse at survival instincts in full display.

"The Journey of the Journey," the Blu-ray disk's main extra, interviews cast and crew about the making of the film and its inspiration.

Director Sofia Coppola shed the shackles of her famous last name with Lost in Translation, the celebrated look at an American actor adrift in Japan. With Somewhere, Coppola once more examines the life of a thespian, but this time there's no Scarlett Johansson to light a romantic spark.

In fact, there are precious few sparks at all in this tale of an A-list star forced to face the reality of being a father.

Stephen Dorff stars as Johnny Marco, an action movie icon whose life consists of watching strippers dance in his hotel room and driving his expensive sports car in circles. Literally.

His malaise lifts when his ex drops their teen daughter (Elle Fanning) on his lap. Johnny's hedonistic lifestyle must end, at least temporarily, while he re-learns what it means to be a father.

Somewhere sounds conventional on paper, but Coppola isn't interested in such niceties as character arcs and motivation. Both Dorff and Fanning excel in their roles, but so little happens on screen there's precious material to absorb.

Coppola's film is like an ode to the downside of blissful fame, except we rarely said downside.

The Blu-ray extra "Making Somewhere" proves far more artfully composed than most behind-the-scenes features. We get to know Coppola the artist, from her body language to her approach to this project.

"'Somewhere' is more like a poem, or a portrait," says Coppola, who helped guide cinematographer Harris Savides by giving him snapshots of celebrities exiting cars and other paparazzi style clips.

Some films seem designed to scare audiences away from the multiplex. Who wants to spend a Saturday night watching parents mourn the death of their toddler? It's why the home video release of "Rabbit Hole" is so welcome.

The film follows a married couple (Aaron Eckhart, Nicole Kidman) processing the death of their four year old son. He's handling the loss better, at least on the surface. She looks like she's ready to crumble at any moment. And their marriage may not survive the impact of those conflicting emotions.

Rabbit Hole doesn't announce the boy's death right away. We learn about it slowly, watching the main characters stumble through their daily routine as if on autopilot. It's typical of the gorgeous restraint applied by director John Mitchell Cameron (Hedwig and the Angry Inch).

Sterling performances by Eckhart and Kidman, plus a nuanced turn by Dianne Wiest, make Rabbit Hole prime home viewing—with tissues at the ready.

The extras include audio commentary by Mitchell, writer David Lindsay-Abaire and director of photography Frank G. DeMarco, plus some deleted scenes.