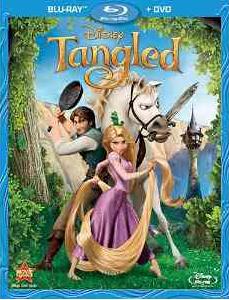 Disney may be out of the Princess business, but Tangled showed the studio can still find new wrinkles to classic fairy tales. The animated film basks in modern storytelling flourishes while adhering to the tenets of the ages-old Rapunzel saga.

Mandy Moore provides the voice of the long-tressed heroine who has spent her entire life locked up in a castle courtesy of her allegedly protective benefactor, Mother Gothel (Donna Murphy). When Rapunzel finally escapes she falls for a shady thief (Zachari Levi of Chuck fame) and finds more adventure than she ever could imagine.

Tangled offers stunning animation, from the lush set design to the expressive faces of both the human and non-human characters. Yes, there's an animal sidekick here, but the cagey chameleon isn't give a voice, thankfully. The jokes avoid easy pop culture references, and the entire affair is earnest to the core without feeling dated. The original songs prove uneven, although some are so potent you can close your eyes and imagine them being re-interpreted for Broadway in the not so distant future.

Rather than heap "name" actors onto the project, the film's creators turned to lesser known stars with magical results. Moore and Levi crackle as potential soul mates, and Murphy oozes evil as Rapunzel's guardian.

The Blu-ray extras don't disappoint. In addition to deleted scenes, extended songs and original storyboard openings, there's the whimsical "Untangled: The Making of a Fairy Tale." Moore and Levi co-host a look back at Disney's 49 previous animated features as well as how Tangled came to be.

Walt Disney himself starting thinking about a Rapunzel animated feature way back in the ‘40s. When the project finally developed decades later, the animated team made sure not to make Levi's character too handsome. They even focus group tested some early sketches of the character to make sure he wasn't too pretty for his close up.

Fair Game will feel familiar to those who have cnn.com as their home page. The retelling of the Valerie Plame spy scandal ends up being the least interesting element in this ripped from the headlines thriller.

Game revisits Plame's outing by government officials at the height of the Iraq War. Naomi Watts plays Valerie, a dedicated spy who juggles espionage as well as being a wife and mother. Her life gets thrown into more chaos than even she can handle when her husband, Joe, is sent to Niger where he debunks claims that Saddam Hussein is trying to score uranium.

That news doesn't sit well with government officials, and soon Joe's good name is being dragged through the Beltway mud. And, much worse, Joe's opponents release Valerie's covert status in the process.

So far, so familiar, but the film improves when it shows how even a strong marriage can buckle under a double dose of physical danger and political shenanigans. Penn flashes his tender side when he tries to hold Valerie in bed early in the film and watches her flinch from wounds she suffered from her physical spy games.

Penn‘s blistering talent normally wins over even those who stridently disagree with his outspoken political views. He's simply that good. But the Oscar-winner stumbles over his own image playing the feisty Bush administration critic.

The only extra material in the Blu-ray package is an audio commentary track from the real life Valerie Plame-Wilson and Joe Wilson.

Just because audiences have already seen plucky female union workers giving it to the system before doesn't delude the power of Made in Dagenham.

The British import, based on the real women who struck during the late 1960s for equal pay, is both a charmer and girl power manifesto.

The strong cast includes an impish Bob Hoskins as a sympathetic union rep and Rosamund Pike as the plant manager's wife underestimated at her hubby‘s expense.

The cliches come at you fast and furious, but there's enough humanity built into even the villains to make the drama worthwhile. And Miranda Richardson scorches the screen as the pragmatic government official trying to bring the workers back to the factory while balancing her own feminist views.

The film's elegance shines through in every scene, from the wonderful compositions to the crisp period decor enlivening even the drab factory locations.

The Blu-ray extras, once you get past the "groovy, baby" title screen, include commentary from director Nigel Cole, deleted scenes, outtakes and a standard "making of" featurette.

Hoskins remembers the original strike and how it garnered so little press attention—at first. "This is big news ... Why isn't it on the front page?" Hoskins recalled of reading the papers coverage of the case back in 1968. "All those years later it came round again"

In The Resident, Swank plays an E.R. doctor who finds a spacious New York apartment for a song. The catch? Her nosy landlord (Jeffrey Dean Morgan) and his creepy grandfather (Christopher Lee) keep popping by at inopportune times. But Swank's character takes a shine to the landlord, a move that sets this curiously flat thriller in motion.

Swank and Morgan share a warm, relaxed chemistry in the early sequences, and Swank looks right at home as a Type A doctor whose love life is flatlining. But director Antti Jokinen can't muster up any real scares as the film takes a dangerous turn in the third act. Those final moments should at least deliver a few jolts, but The Resident manages to underwhelm at every turn.

Swank produced "The Resident," a feature which arrives on home video sans extras.

Horror fans finally got treated with respect by the 1996 shocker Scream, out this week on Blu-ray along with its two sequels to coincide with the fourth film's theatrical bow.

The original Scream tweaked the audience's collective knowledge of the genre, exploiting every cliché to its snarky advantage.

"Watch a few movies, take a few notes," as the killer helpfully admits at one point in the film. That meta-spirit gave the slasher genre new life. And, if that weren't enough, Scream's now iconic opening kill took down Little Miss E.T. herself, Drew Barrymore.

Former "It" screenwriter Kevin Williamson doesn't talk down to horror junkies via Scream. He applauds their passion while lobbing a number of genre shout outs including a Linda Blair cameo and a fleeting shot of a man wearing the classic Freddy Krueger ensemble. The ending is messier than even a bloody horror film deserves, as Williamson and director Wes Craven pile on the story layers until the whole production wilts.

The moldy extras on the Blu-ray edition hearken back to the earlier DVD release, including a commentary track with Craven, a production featurette and a look at Barrymore's glorified cameo as seen through the eyes of the cast and crew.