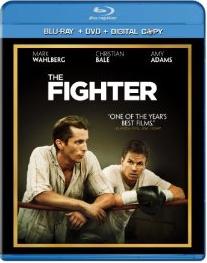 Rocky Balboa never had to deal with an intrusive mama or a drug-addled brother threatening his pugilistic career.

The Fighter, based on boxer Micky Ward's tumultuous ring career, proves the Rocky template can't be counted out yet with the right wrinkles.

How can a promising fighter punch past his family obligations and his own self doubt?

Enter Amy Adams as a feisty barmaid who sees something special in Micky. Her character gives this fighter the push to look beyond family toward a brighter future. But casting aside the likes of Ma and Dicky won't be easy.

Wahlberg may have the lead role in The Fighter, but he's dwarfed by the acting talent surrounding him. The erstwhile Marky Mark possesses the physicality needed to play Micky, but at times it feels like he's shrinking before our eyes. His uneven work marks the film's only sore spot. Director David O. Russell keeps everything else spinning in near perfect harmony, from the outsized performances by Leo and Bale to the quiet details of Micky's blue-collar town that doesn‘t feel condescending or forced.

The Blu-ray extras include deleted scenes, commentary from Russell, "The Fighter's Code: Filming 'The Fighter'" and "Keeping the Faith." The latter is a true family affair, with the Ward's extended family and friends sharing memories of what the real Micky and Dicky Ward meant to Lowell.

Micky Ward says he never envisioned becoming a professional prize fighter, and that he first hit pulled on the gloves to get in better shape. The rest is sports—and cinematic—history.

Jennifer Aniston is going to keep cranking out romantic comedies until she gets one right.

The Friends standout comes closer than usual with The Switch, an eclectic feature which casts Aniston as the victim of a rather cruel mixup.

She plays Kassie, a single woman who opts to go the sperm donor route to get pregnant. She lines up a donor to get the job done, but her best friend (Jason Bateman) ends up sabotaging the process during one very convoluted set piece.

Flash forward seven years, and Wally notices that Kassie's young son looks and acts an awful lot like him. Will this series of events push Kassie and Wally past Friendville and into Something More-land, or could the titular switch crush their longstanding bond?

Aniston is the more bankable box office star, but it's Bateman who shines throughout uneven material. He's twitchy and nervous, but it's rooted in a character who deserves our sympathy as well as a few hard-earned laughs. Kassie may be yet another underwritten role, but Aniston provides her with enough depth to make the film's curious love triangle connect.

Even when the film falters there's always a Jeff Goldblum or Juliette Lewis to swipe a scene or two.

The Blu-ray presentation features the trifecta of deleted scenes, an alternate ending and bloopers, plus "The Switch Conceived," a making-of featurette letting the film's key cast members expound on the project.

"The tone is reality. You just treat it as such," Aniston says, who has known her co-star for years. Perhaps that‘s why they share such good friendly chemistry.

Tags: The Fighter, The Switch
Print