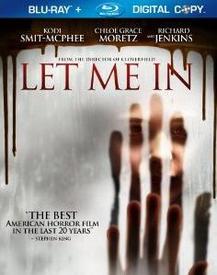 Fans of the neo-classic Let the Right One In worried any American remake would only dumb down a remarkably restrained vampire feature.

Director Matt Reeves of Cloverfield fame didn't let that happen. Let Me In actually improves upon the 2008 Swedish film, itself inspired by John Ajvide Lindqvist's novel.

The film stars the remarkable Chloe Moretz as Abby, a teen vampire who stays alive thanks to a human companion (Richard Jenkins) who takes care of her feeding needs. Her undead lifestyle changes when she meets Owen (Kodi Smit-McPhee), a young boy from her apartment complex preoccupied with school bullies.

The two outcasts share an instant bond and, later, a friendship to be tested by Abby's nighttime proclivities.

Two stellar lead performances anchor Let Me In, and the spasms of genre violence fall neatly into place. The story's moral complexities make the horrors even more disturbing.

The Blu-ray extras include a satisfying "making of" featurette detailing the casting, special effects and other on-location decisions as well as a bland peek at before and after CG shots. The deleted scene of note shows poor Abby getting bitten by a vampire many a moon ago, a sequence that while unnecessary is haunting all the same.

A Woman, a Gun and a Noodle Shop qualifies as the most clever remake of 2010—or any year, for that matter. Director Zhang Yimou draws inspiration from Joel and Ethan Coen's Blood Simple but changes the setting to feudal China.

Who saw that coming?

Yimou, the mind behind the delirious House of Flying Daggers, keeps the plot intact and even pays homage to the film's more inspired moments. But in retelling Blood Simple the director injects a bit too much of Raising Arizona, the Coens' second feature, into the blend.
The result is a broad comedy spliced with domestic chills that's rarely hilarious or tense.

Wang (Ni Dahong), the owner of a noodle restaurant with nary a customer in sight, discovers his wife (Yan Ni) is cheating on him. So Wang hires a local police officer (Sun Honglei) to kill both her and her lover, the meek Li (Xiao Shenyang). But other emotional pieces are already in motion, complicating matters significantly.

The players run through their paces as if no one else existed in this Chinese hamlet. Perhaps it's the directors way of intensifying the selfishness of the leads, but it makes an already dry production feel barren.

Yimou concocts some wondrous visuals in between the story beats, from flying dough sailing through the air to a shot capturing Blood Simple's most gruesome scene. And no one coaxes color out of the screen quite like Yimou. Even simple bird's eye views of the Chinese landscape prove astounding.

While the cast offers up uniquely one-note performances, Honglei's steely-eyed assassin plays his to perfection.

The voluminous Blu-ray extras include segments like "Actors Joking Around," "Behind the Scenes Antics" and "Actors Falling," as well as more sober reflections including Yimou discussing the film's look and script.

It's not surprising Gareth Edwards earned a shot at remaking Godzilla—again—due to his indie film "Monsters." Edwards made a creature feature with precious little money, and the beasties look nearly as impressive as those seen in blockbuster films.

But surely the folks funding the new Godzilla didn't hire Edwards for his screenwriting chops. Monsters, for all its hardscrabble efforts, is a mess.

Six years ago, a space probe disintegrated over Mexican airspace depositing alien creatures across the country. The monsters quickly took root, and now northern Mexico is under quarantine.

A Mexican-based magazine photographer (Scoot McNairy) is asked by his boss to escort his daughter (Whitney Able) out of the country in one piece. The two start bickering almost immediately, but they're forced to work together in order to evade the monsters roaming the Mexican countryside.

Monsters focuses more on the main characters than any alien attacks, a novel approach had the characters been well developed—or even remotely likable. It's hard not to root on the monsters when the characters behave so badly.

The Blu-ray extras include a commentary track featuring Edwards, McNairy and Able, deleted and extended scenes, a New York Comic Con chat with Edwards and a Visual Effects featurette. The latter shows the modest computers where Edwards whipped up so many of the visual elements feature in the film. And it's fascinating to watch Edwards describe how he shot various sequences while imaging the CG effects he would add in later.

The 2004 biopic Ray did more than announce Jamie Foxx's arrival as an actor of consequence. It brought Ray Charles' story to life in a way most biopics rarely achieve. The film earned Foxx a richly deserved Best Oscar statuette, and now it's available on Blu-ray along with a gaggle of illuminating content.

The extras include footage of the real Ray Charles meeting Foxx for the first time, and an interview with Foxx and director Taylor Hackford describing why Foxx keep a respectful distance from Charles after their first encounter. Foxx describes himself as a sponge, and he didn't want to absorb too many element of Charles in his later years.

Hackford recalls Charles' direction regarding the project—"just tell the truth and we'll be okay," the legend told him. Hackford and co. did more than okay, and the Blu-ray edition confirms it.