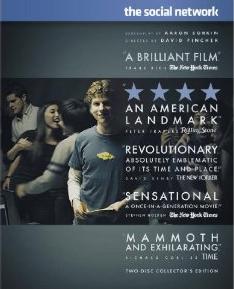 The Social Network sounded like the most boring movie on the 2010 slate—a peek into the dawn of the social networking sensation Facebook.

Director David Fincher and screenwriter Aaron Sorkin had something else in mind, a story that touches on friendship, creativity and betrayal in ways that are both modern and timeless.

Jesse Eisenberg excels as Mark Zuckerberg, the brilliant Harvard University student who created a social networking platform that would change the way people surf the Web. Or did he simply swipe the idea from some university mates? The film is part mystery, part character study of a young man whose intellect far outpaces ironically, his social skills.

Screenwriter Aaron Sorkin turns The Social Network into a showcase for his most dazzling wordplay yet, eliciting laughs and dramatic triumphs within every intricately choreographed scene.

The two-disk Blu-ray package includes a feature-length documentary on the making of a film dubbed "How Did They Ever Make a Movie Out of Facebook." Viewers can watch Fincher on set and at the initial table readings shaping the story syllable by syllable.

With such attention to detail it's little surprise Network is the prohibitive favorite to win Best Picture at next month's Oscars ceremony.

The best nugget in the extras may be the "Swarmatron," a look at the retro-looking device musician Trent Reznor used to create the film's score. Twist one of the many knobs and dials and a sound unlike anything you'd hear out of an organ, piano or guitar comes to life.

"Everything's a little out of tune," Reznor admits with a smile. The same can't be said of a film which hits all the right notes.

Dances with Wolves embraced the trappings of the Hollywood epic—lush cinematography, a complicated hero and a tale of man's inhumanity to his fellow man - and was rewarded with seven Academy Awards.

Now, the film marks its 20th anniversary with its Blu-ray debut, adding a full hour's worth of material to the already lengthy narrative. The results don't slow the film down. Instead, it enriches the experience, making Kevin Costner's debut as an actor/director all the more remarkable.

Costner plays Lt. John Dunbar, a U.S. soldier left to oversee a post on the cusp of Indian country. Through a series of events he comes to know—and trust—a Sioux Indian tribe which takes him in as one of their own. His loyalties are tested when his fellow soldiers return to find a very changed lieutenant, one who now prefers the name Dances with Wolves.

The Blu-ray extras include a previously released documentary on the making of the movie, audio commentaries from Costner and producer Jim Wilson and features recalling life on the frontier. The best bit involves a history quiz feature where viewers can test their knowledge of the wild, wild west - and some ghastly war-time surgical procedures - at various stages of the movie.

The arrival of Raging Bull on Blu-ray gives one of the better arguments for embracing the High-Def format. Not only can you see director Martin Scorsese's master work in crisp, clear black and white, but the bevy of extras almost dwarf the cinematic presentation.

De Niro stars as boxer Jake LaMotta, a fighter whose personal demons threaten his chances at becoming the next middleweight champion. He's violent in and out of the ring, prone to sudden outbursts against those closest to him, from his loyal brother and manager (Joe Pesci) to his platinum blonde bride (Cathy Moriarty).

The 30th anniversary Blu-ray edition include a bevy of commentary tracks, including chatter from Scorsese and editor Thelma Schoonmaker, the cast (sans De Niro, Pesci and Moriarity) and even LaMotta himself.

The "De Niro vs. LaMotta" segment splices scenes of each man in and out of the ring to show how Bull stayed faithful to the source. "Marty on Film" lets the Oscar winning director explain how being a sickly child fostered his love of cinema. You might have to hit the pause button now and then. Scorsese talks a mile and a half a minute, and you won't want to miss a word.

"Marty and Bobby" describes the bond between Scorsese and De Niro, what the director calls "beyond telepathy." The featurette lets both men honestly break down the history of the film and how the project almost didn't happen.

If all that isn't enough, you can watch Moriarty's 1981 appearance on "The Tonight Show with Johnny Carson" on behalf of the film.