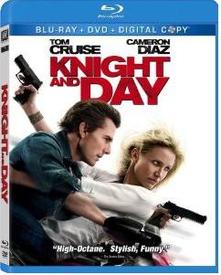 Most movies would kill for a $76 million domestic gross, but Cruise is used to eclipsing that mark by the third weekend.

That doesn't detract from Knight and Day's giddy pleasures, like seeing Cruise flirt with a dazed Cameron Diaz amidst a logic-free storyline.

Diaz is June, a beautiful singleton who meets cute with a handsome stranger (Cruise) at the airport. Their chance encounter is the first in a series of adventures that take her breath away. This mystery man turns out to be a superagent, but June isn't sure which side he's on.

Who can blame her, what with all the logical chasms and crazed stunt work at play? But the stars anchor the story and add chemistry to the mix. Director James Mangold (Walk the Line) pushes his narrative strengths aside to play in the same sandbox as Salt and Mr. and Mrs. Smith. The results fall in the guilty pleasure camp.

Robert De Niro can do funny, something he confirmed with the 2000 comedy Meet the Parents.

The hit film, and its lackluster sequel, Meet the Fockers, make their Blu-ray debut this week just in time. Little Fockers, the third film in the franchise, hits theaters until Dec. 22.

In Parents, poor Gaylord "Greg" Focker (Ben Stiller) suffers a series of tragedies when he dares to make nice with the parents of his new squeeze, Pam (Teri Polo). Greg's potential father in law (De Niro) is no pushover. He's an ex-CIA agent who puts Greg under a lie detector test and threatens to banish him from the "circle of trust" should he step out of line.

Naturally, Greg missteps all over the place, and while the situations are often forced the battle between the male leads rarely disappoints.

That magic evaporates in Fockers, the sequel introducing Greg's parents (Dustin Hoffman, Barbra Streisand) into the franchise. It's a textbook sequel in all the wrong ways, recycling gags from the first film and trotting out baby reaction shots to coax some badly needed laughs.

Even the near dream casting of Hoffman and Streisand doesn't pan any comedy gold.

The Blu-ray extras on Parents include deleted scenes, a profile of franchise director Jay Roach (replaced by Paul Weitz for the upcoming Fockers sequel), a feature on lie detector testing and some animal wrangling tricks. The Fockers extras also include deleted scenes, plus blooper footage, baby wrangling 101 and a Focker family portrait letting Hoffman and Streisand share their perspectives on film comedy.

The Sorcerer's Apprentice is the kind of film that should make kids cheer and prevent parents from rolling their eyes for 90-plus minutes. Faint praise, but hardly inconsequential given the sorry state of children's friendly films not carrying the Pixar brand.

Nicolas Cage plays an centuries-old wizard named Balthazar trying to teach a modern disciple named Dave (Jay Baruchel) the ways of the mystic arts. Seems Dave is the chosen one, a person who can wear the late Merlin's ring and beat back Balthazar's sworn enemy (Alfred Molina, sturdy as always).

The training is the hardest part, and it's here where the film doffs its wizard's hat to the title. Dave watches as a parade of brooms sweep into action just like they did in Fantasia.

The banter between Balthazar and Dave is gently comic, and the special effects just dazzling enough to keep us engaged - nothing more. The film moves swiftly and doesn't take itself too seriously en route to the predictable finale.

The Blu-ray goodies include deleted scenes, outtakes, "The Science of Sorcery" and behind-the-scenes peeks at the movie's creation.