Iron Man kicked off Summer 2008 with a bang. It peaked on a whopping 4,154 screens and was able to ride its wave of popularity for months, totaling $318.3 million by the time the projectors quieted. Fiscally speaking, this is easily director Jon Favreau’s most successful film to date and a much appreciated victory considering that his previous effort, Zathura, bombed. 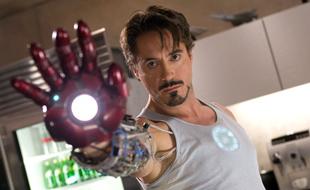 It should go without saying that no one else could have portrayed war-profiteer-turned-hero Tony Stark with more charisma and charm than leading man Robert Downey Jr. While the role remains far from the most emotionally ranging and intellectually challenging of Downey Jr.’s career, it still demands a delicate swagger to pull off correctly. Stark is, for all intents and purposes, a brash, alcoholic womanizer and yet Downey Jr. and Favreau manage to keep him immensely likable. It’s quite a balancing act to capture America’s interest while being so obnoxiously robust and full of bravado. Then again, Downey Jr. has been doing this publicly for years. Perhaps it just came naturally to him.

In reality, the mood of the film and its aesthetic touch parallel Stark’s personality. Luckily, the small screen in no way cheapens the great spectacle put on by the SFX team and Favreau seemed very confident with his lens and vision here. The suit specs, in particular, are outstanding. That being said, this is still just another superhero film and it in no way raises the cinematic bar in any considerable way.

Due to Downey Jr.’s screen presence, the witty, aptly-paced first half truly soars. It is not until after a moral fulcrum is interjected that Iron Man begins to weaken. Common, but potentially rich, themes of rivalry, betrayal, and responsibility are addressed in very light strokes, wasting an opportunity to give Stark true soul.

The climax feels rushed and unfulfilling, making one realize that, in this case, the action indeed should taken a back seat to more weighty content. Still, Iron Man is a breezy and watchable movie, and its sequel will likely produce a familiar feel (and a lot of cash).