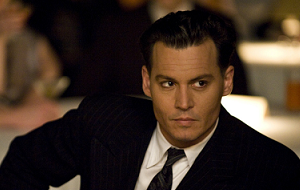 I doubt that all who contributed to Public Enemies' $97 million domestic gross knew what they were in for. This is not to suggest that the advertising was deceptive or the story subversive, but when a film boasts star power like Johnny Depp and Christian Bale, most would expect a film more serviceable to the actors. Sure, Depp and Bale fare well as John Dillinger and Melvin Purvis, respectively, but it's the voice of auteur Michael Mann that's most expressive. Mann-responsible for the indispensable Heat and The Insider-has created a tapestry of contrast. Light blasts beautifully from darkness and machine guns crackle finely against the night air, but the most important contraposition is internal, not visceral. Though an ode to composition in and of itself, Public Enemies also works to exhibit the dueling moralities of cop vs. robber, namely, Dillinger vs. the System.

Depp plays Dillinger with the confidence and grace we know he's capable of (a thankful vacation from Captain Jack Sparrow). Bale shows some range as well, gruff disposition notwithstanding. The two represent differing stances on life and professional ethics, even though one of their professions is illegitimate. The hypothesis of Mann's work is in the intertextuality of our country's developing media-and communications in general-and the FBI's-namely J. Edgar Hoover's-attempted cessation of crime. Rather than take path of flattery, Mann paints the Bureau's motives as arrogant and bloodthirsty. The picture latently paints those involved with the Dillinger manhunt, especially Purvis, as socially distant, which makes their snowballing authority all the more frightening. When this is juxtaposed to Dillinger's down-to-Earth demeanor, moral questions arise, as to evoke the intangibility of justice. While Public Enemies is far from Mann's most difficult work, its polished sense of craft masks a discerning tale of our own self-governance; that our country's policy is at the mercy of criminals and not the other way around. Both recommendable and rewatchable.

Mann's penchant for HD Digital photography seemed like an odd fit for a Depression-set gangster film, but it's hard to argue with the results. Universal's Blu-ray treatment of the Dillinger ballad is well-balanced and exhibits a comfortable amount of detail in close-ups. The film's tense tone calls for an array of shadow and the BD transfer manages the variable darkness impressively-instances of any gauche noise are infrequent and a relative non-issue. A few shots look a bit unbecoming given the picture's historical air, though this issue was also present in theatrical prints and isn't a transfer flaw, just a distraction. That said, the disc's sound design is immaculate. Much care was put into the release's sense of sound in relation to space, making peripheral noise both sensational and evocative. This is a strong output by Universal and matches the stately standards of a great American director.