The success of screenwriter Diablo Cody (Juno) was one of the more intriguing stories of the 2008 Academy Awards and although I was hardly floored by the inventive slang and needlessly complex confabs of her Oscar winning script, I still had a positive impression of the picture. With her second screenplay Jennifer's Body such colloquialisms returns, but the end product is far from winning. Perhaps the absence of helmsman Jason Reitman is to blame-Karyn Kusama of Æon Flux infamy directs this effort-or maybe the novelty of pseudo-hipster jargon has a shorter shelf life than Cody had thought. No matter, something is wrong with Jennifer's Body and that something extends beyond its dialogue. Cloaked in self-importance and naivety, the film gustily parallels a small-town catastrophe to September 11th, crucifies those who capitalized from it-namely "tribute" musicians-and then shifts gears to draft contemporary beauty as demonic. In a word, its subtext is inane. To go further, its execution is crude as well. Despite being armed with eye-pleaser extraordinaire Megan Fox, Body never got legs. It finished its theatrical run with a gross of $16.1 million despite an initial distribution of 2,702 locations. 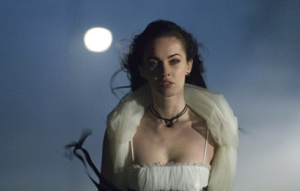 Told through incessant voiceovers and show-and-tell flashbacks, the film never establishes any sense of cohesion or rhythm and instead offers up a patchwork of undercut conversations, which are aggressively punctuated by indie rock music. Though the inclusion of music and all things arty are meant to be expository, such elements come off as more typical than telling. As such, Body feels like an exercise in faux-pomo décor with no real end goal. The story (and title) alludes to the transformation of cheerleader Jennifer (Fox) following a satanic offering gone awry. Thinking they were sacrificing a virgin (really, guys?), a band of occult-happy musicians accidentally turn Jennifer into a demon while attempting to procure success via the devil. Rather than use this motif to demonstrate the changes of adolescence-as in John Fawcett's far superior Ginger Snaps-Body goes the less noble route of contrived violence and hyper-sexuality. While bearing some merits of a throwaway slasher, the movie is hardly strewn with the kind of self-aware degradation that make such films successful. Instead of expounding on the difficulties of growing up, the weight of socialization on friendships, or small-town stratification, Body is an angsty pop-culture vehicle with no sense for comedy, horror, spoof or self.