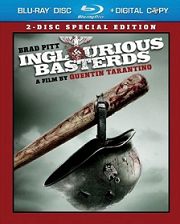 I feel bad for doubting Quentin Tarantino. Though my own lack of faith is of no ultimate consequence, I can't help but wonder why my skepticism piqued around the same time that his latest film, Inglourious Basterds was to be released. Perhaps my wavering fandom could be attributed to Tarantino's dubious working pace (only six feature films over a 17-year period), or because he seems increasingly enamored with all things trash cinema-something I'm less than passionate about. Regardless, Basterds is, at worst, a return to form for the American auteur; at best, an eclipse of it. Following a warm critical reception and a playful ad campaign, the movie went on to claim an impressive $120.5 million domestically, which, without accounting for inflation, makes it Tarantino's biggest film to date. Some might argue-and I'd be inclined to agree-that it also ranks among his best.

From start to finish Basterds is distinctively Tarantino. Adorned with his usual compliment of self-reference and quirk, the movie reads as a stylish exploration of public influence. While the picture has been labeled all-but-unanimously as a "revenge fantasy," I find this marker to be trivializing and even a bit demeaning. Yes, vengeance is an aspect of the story, but a fairly minor one. Rather than take this ostensible, easy route, Tarantino's film is of constant allusion to the many facets of storytelling and, expounding upon that, how the nature of a story affects the weight it carries. As exhibited, such tales can be found everywhere in life: newspapers, gossip, and, naturally, movies. Although the information accompanying these yarns is oftentimes secondhand, this doesn't seem to diminish their impact; even matters of opinion somehow make their way into our cultural canon. Tarantino's picture circumvents history and instead espouses the immediate effects of stories as well as the far-reaching aftermath that follows.

Befittingly, Basterds is chock full of lies. There was no group of Nazi assassins that called themselves the Basterds, though if there were, the marker "inglorious" would certainly fit. Brad Pitt's Aldo Raine leads the titular troop-comprised mostly of Jewish-American soldiers-into battle, though their focus is far removed from the front line. Rather than retain the anonymity of your standard GI, the Basterds employ guerrilla tactics and mercilessness as a way to spread their message: if you're a Nazi, we're going to kill you. Basically, they're war criminals, though damn charismatic ones at that. Raine is especially jocular given the circumstances and carries himself with the kind of swagger one would associate with spaghetti western cowboys. This is no accident, as Tarantino basks his Basterds with a spectrum of sight and sound. Scores are lifted from the director's favorites and the picture's narrative-as expected-is littered with evocative eccentrics.

Though lavish and fun, Basterds also sports some serious subtext. Not to be forgotten, the film is about World War II and carries the according themes of cultural difference, discriminatory violence and communicable exploitation. In this, Tarantino establishes a crisp dynamic between varying countrymen and, although guided by blanketed nationalism, individual personalities never ring generic. The picture's unique blend of fact and fiction-I use "fact" lightly here-allows the director to play a game of "what if" with history. What if there was such a group as the Basterds? Would they be considered heroic or vile? Is our cheering for them-and the blood they spill-as contemptible as the Germans cheering on propaganda films? Is the genocide of Nazi officials more justifiable than the bombing of Japan? Tarantino wisely leaves such questions unanswered. Through Basterds, the director demonstrates the inherent dichotomy of war films and the contrast of violence-real and fake-all while championing the art of storytelling. While I don't agree with Raine's final, self-referential use of the word "masterpiece," Basterds is, if nothing else, far from inglorious.

This meticulously structured and idiosyncratically styled film is given worthy BD treatment by Universal. In short, war has never looked (or sounded) this good. Tarantino's sprawling narrative allows for an array of settings, all of which read as distinct yet cohesive. Universal douses the film with strong (but not overpowering) coloration, and levels of contrast and detail are also pleasantly preserved. Noticeably lacking is a definitive grain structure, but this absence is of no expense to the image quality, which is pristine. Delicate features like faces manage to retain a natural warmth-a rarity considering the low-grain approach. If DNR was used, it was done so with an unforeseen precision, for skin tones and the like look real, not glossy. Usually problematic, shadowy areas read smooth and true. The HD audio track is equally definitive, despite its somewhat schizophrenic balance of low mood pieces and heightened action noise. Both aspects of the transfer showcase capabilities far beyond that of standard definition. Fans of the film should definitely buy the Blu-ray.