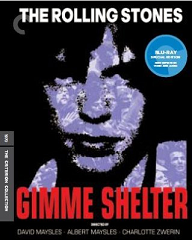 More than the title of a rock song, the words "Gimme Shelter" embody a growing concern for a culture on the cusp of collapse. When writing the churning anthem for their 1969 album Let it Bleed, Rolling Stones Mick Jagger and Keith Richards meant it more as an impassioned plea than a battle cry-its content reflects an opposition to the Vietnam war and the forced realities that accompany such violence. Not expected was how the phrase-and the Stones-would eventually become synonymous with the demise of these lofty notions of love and harmony; how a tectonic shift of sentiment would take place at the feet of the world's biggest band. In this, the job of filmmakers David and Albert Maysles and Charlotte Zwerin significantly evolved following the 1969 incident at Altamont Speedway. Originally documenting the finale of the Stones' North American tour, the trio of directors soon found themselves witnesses to horror as flashes of brutality began dotting the once faceless crowd. The result was four dead and numerous questions unanswered, even if the impact of the event was crystal. People came to realize that ideological nirvana is merely ideological and those who pedestaled agreeable existence were left shaken, if not entirely disillusioned. A once ordinary rock film (scale aside) was to become an examination of cultural dichotomy and innocence lost.

Opening with gusto, Gimme Shelter documents the final ten days of the Rolling Stones' post-Woodstock tour by trading footage of performances with candid, backstage looks. The idea here is to showcase a cultural movement built on a melodic interaction and how it was, subsequently, cursed by its lofty ideals. The Altamont show is prepared in a fashion that could generously be labeled as fly-by-night. At the time the Stones carried with them an aura of importance-that they would, in some way, make a difference. In this, the main concern of the concert's preparers was to merely make it happen, even if that meant throwing caution to the wind. By today's standards, everything from preparation to security is lax. Benefiting the picture are these decades of caution in which we've lived since, as it paints the era's sensibilities as honorable yet impossible.

Rather than broadcast much discernible bias, Gimme Shelter remains understated. Stylistically, the film is decidedly aboveboard and offers glimpses into a world of unsustainable lives. To see parents with children is not so much disconcerting-the victims of the violence are of no mystery-as it is eye opening. While we don't worry about the outcome of these featured infants, we do have to acknowledge their proximity to the violence and what this implicates about the times as a whole.

The conflict that saw the loss of four individuals can be attributed to a clash between regular concertgoers and members of Hells Angels. The same free-country credence that prompted the en masse gathering of Generation Love also allowed the bikers to not only attend, but commandeer the stage front. Though the film depicts their presence as intimidating and authoritative, no direct blame is placed on the gang. Instead, Gimme Shelter works as an exhibition of several points of view, none of which are decisively labeled as "right." The Angels seem disorderly and aggressive in one interview yet composed, even victimized, in others. Jagger's public persona is shown as overtly sexual; behind closed doors he seems humble and self-critical. Furthermore, much of the film revolves around his reactions to concert footage and the violence that was perpetrated in San Francisco. While the movie remains fairly unbiased in its characterization, I can't help but think it depicts Jagger as a bit of a boy-too young to appreciate the scale of the killings, or perhaps too drunk on fame to care. The point seems to be that, through varying degrees of ignorance, no one realized the weight of the Altamont incident at the time and how easily corruptible such ideal-based culture are.

Though the film is mostly comprised of handheld archival footage, Criterion's Blu-ray treatment brings about layers of contrast and mood as only high-definition can. The new-footage aesthetic plays up the reality of the situation, as well as an underlying sense of dread. In no way is the film something I'd label as visually remarkable, yet the transfer is surprisingly clean and evokes the times' tonality well. Because full-length songs also occupy the documentary's running time, an emphasis is placed on making these staged elements all the more spectacular, and they're nothing short of experiential in 1080p. Noticeable is a heavy amount of grain, indicative of the technology used to make the film. Nonetheless, movement and troublesome dark spots look uniform when compared to the rest of the image, making this version of Gimme Shelter superior to DVD capabilities. Audiophiles will also relish in the new sound track, which allows for some nice acoustic complexity and helps amplify the picture's thematic contrast.