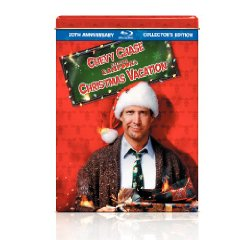 The door opens and bodies pour in. A wave of limbs, bad suits, and pungent perfume overtakes the foyer; the camera is angled low, the characters' hopes lower. Emerging from the swarm is Johnny Galecki as Rusty Griswold-an adolescent left disoriented in the wake of his elder relatives-who looks at the camera and delivers one of the best facial expressions in film history. The boy looks as if he's just had a glimpse of hell, and in some ways he has, for the Griswold Christmas gathering is the pinnacle of perennial punishment. Galecki's look is a summation of what's to come; namely the ridiculous-oftentimes laughable-lengths we go to in the name of the holiday spirit.

The third adventure for the Griswold gang, Christmas Vacation details the frustrations of the holiday season by showing the gradual deterioration of family bonds, holiday warmth, and dogmatic piety-the result of capital extravagance and should-be-defunct traditions-before reminding viewers just how important compassion can be, provided it's not turned into a commodity. Thematic concerns notwithstanding, the film is a comedy and revels in physical humor; it's a movie set in the real but is not without examples of stilted bodily resilience. The family themselves represent a typical Midwestern household-caricatures of familiar nuclear families, though their personalities are never exaggerated to the point of disbelief. People like this could very well exist and odds are we all know one or two. The most telling trait of the featured players is their merriment, as their differing holiday views often pave the wave for confrontation and, subsequently, laughter.

Clark (Chevy Chase) is the patriarchal head of the Griswold family. Steeped in sentiment, Clark wants his family to experience the prototypical ol' fashion Christmas, but soon learns that such a thing comes at the cost of physical and mental health. His penchant for holiday hoopla is lost on his children Rusty and Audrey (Juliette Lewis), who are reaching the age when kids begin branching off socially. Their father is fully aware of this and thus theorizes that by helming the best Christmas ever paternal bonds will be restored. In short, all will again "be right" with the Griswolds. This being a comedy, obstacles naturally arise. Many of these hindrances take the form of in-house quarreling and material emphasis. Vital to the perfect Christmas is Clark's bonus check, the status of which is unknown-jettisoning the fancy of family harmony into limbo. Meanwhile, wife Ellen (Beverly D'Angelo) remains supportive, but noticeably worried.

Family spats rise in frequency as more and more Griswolds-some expected, some not-arrive at Clark's house. As if the parents-in-law weren't enough, other, more exaggerated relatives make appearances as well. Cousin Catherine (Miriam Flynn) and lovable drunk of a husband Eddy (Randy Quaid) arrive and come to break every norm and value that Clark holds dear. Though also family-oriented, their less-than-polished social skills begin rubbing Clark the wrong way, which challenges his moral stance toward lower-class citizens. This issue of class resentment is nothing new to the film, for Clark's boss (Brian Doyle-Murray) is a walking model of self-anointed superiority. Such parallels are hardly dealt with much sincerity, though the presence of such culture contrasts are inviting nonetheless. Other random arrivals include stogy-smoking Uncle Lewis (William Hickey) and his wife Aunt Bethany (Mae Questel) who-while not as theoretically rich as other characters-generate some of the heaviest laughs of the film in the way they exercise just how out of touch one grows with age and the troubles we unknowingly put others through as our capacities (hilariously) diminish.

Though hardly a film of complexity, Christmas Vacation does well in demonstrating the difficulties we thrust upon ourselves every December and begs the question, "To what end?" Nonetheless, Vacation never loses sight of its comedic scope and is ever ready with a clever gag or turn of phrase. It has garnered the reputation of being a holiday staple and rightfully so.

Not being a film of heavy aesthetic concern, it's of little surprise that Vacation looks less than optimal on Blu-ray, but I still find this Warner Bros. treatment to be subpar. The image is for the most part clean, but not without some scratches scattered about. Skin tones are perhaps a bit too warm, and sometimes-especially during interior scenes-are a bit heavily hued. Noise is apparent as expected, and consistently so. I was not able to spot any DNR in dark areas, though the detail here isn't very good either. In fact, visual intricacy as a whole is below average for BD releases, yet the busier imagery is a bit crisper and transitions more smoothly than previous DVD versions. Bright, exterior scenes fare best and such moments-rare as they may be-do offer a more pleasing picture.

In a clever, self-satirizing way, the tin box gift package works. Though tacky looking-purposefully so-the cover art commemorates the Griswold spirit in a way that only bright colors and gaudy pictures can convey. The trivial tokens that accompany the Blu-ray disc are odd, yet useful. These extra gifts, if you will, recall charming little movie-themed stocking stuffers and include beverage coasters, a Santa hat, and fake snow. Perhaps these items seem generic, but I feel they're justified in expressing the thoughtlessness that perpetuates the season's gift giving. In other words, they're fun, and in the same vein as the film itself.