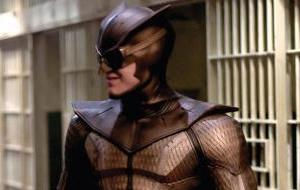 I never thought I'd find myself writing this, but Zack Snyder has impressed me. After seeing the contemptible 300-which almost became the first film I walked out on in ten years-I had all but given up hope on ever finding myself hip to Snyder's rhythm. I couldn't connect to a film so chock-full of convoluted and arrogant stylings, exposition that's oh so blunt and undertones meant to massage the college-aged prostate. It all hit me as the immature product of an immature artist, if that even is the right word. Still, Watchmen is a different beast and Snyder treated it as such. He had the not-so-easy undertaking of adapting the most celebrated work from the comic book medium, a task that's as much concessionary as it is ambitious. Expectations and pressures ran high and people were let down, which, coincidentally, is an omnipresent theme in the picture itself. Those most disappointed by Snyder's efforts were not rabidly canonical fans but producers. Despite the buzz surrounding the project, it grossed only a modest $107.5 million domestically given its scale and source material. It never eclipsed its opening total of 3,611 screens.

The film opens somewhat brilliantly. Visually, Snyder's adaptation seems congruent with the book's tone and his lens not only evokes mood but also moves with purpose; I didn't know he was capable of either. In this, the opening fight between the Comedian-a retired costumed hero-and his assassin is eye opening. The scene is a short one, but demonstrates a sense of care and delicacy (or as much care and delicacy as you can in composing a murder sequence). Contextually, the scene works to set the plot's machinery into motion and to serve the viewer a visual appetizer; theme takes the back seat but understandably so.

What follows graciously picks up the opening's thematic slack and introduces the film's universe-one that parallels our own but in which super heroes knowingly exist. It's a world not sanctioned by our reality but our nature. The opening credits crawl atop images of Watchmen throughout the years, the figures reminiscent of wax museum reimaginings. Much of the film's exposition is covered here, as these all-but-still images showcase the characters' glory days whilst simultaneously addressing their political tendencies. These visual snippets are important and referred back to throughout the movie, but never in an overwrought or arbitrary way. Such developments and stylistic implications allow Snyder's vision to be convincing and evocative, as it champions the characters' reflexivity. This assured development of the main players and their surrounding world creates a unique dialogue between environment and self - a catalyst in clarifying the film's more existential matters. These superheroes are as flawed as the everyman, yet they struggle with issues of self-worth, identity loss, and the importance of fraternal order. Despite having the physical power and mental capacity to change the world, they are not immune from the world's influence on them.

What Watchmen does lack is a knockout punch. Snyder's tableau recreation is more wholly satisfying than The Dark Knight, though less creative in a cinematic sense. Naturally, Watchmen's strongest elements are direct byproducts of its source while its weaker ones-acting and misplaced bluntness-are faults more filmic in origin. Visual compositions help to guise such shortcomings, but some of the more emotionally resonant moments are trivialized as a result. Its ratified ending may also spawn a tiff with some, as it transplants the effects of mass-murder to the perpetrator of the violence and away from the more relatable victims. Still, the picture is strong and arguably the most ideologically interesting of the year. Fans of the novel will likely find little purpose for it-but as a film and film alone- it's certainly a worthy experience.

It comes as no surprise that Watchmen looks marvelous on Blu-ray. Though the movie is tonally saturated with gloom, the excellent production design and digital alterations demonstrate an array of detail that's more than occasionally beautiful. There's a certain vibrant energy that courses through the image-particularly in the utilization of light and color-and the BD transfer captures this flawlessly. Frames demonstrate an excellent amount of depth and clarity without looking artificially glossy. The special effects are largely lucid though at times falter clumsily-a fault of the film, not the transfer. Still, both real and CGI characters convincingly inhabit the film's moody backgrounds. The image feels almost oddly natural despite it being largely digitally dependent. Scenes removed from the theatrical cut also show an aesthetic consistency with the rest of the film, which allows this significantly longer version (24 minutes) to still feel tightly paced. This Warner Brothers release is of precision and care and does a good movie a great justice. Recommended.