They say that the problem with first impressions is that you only get to make one, which does not bode well for the possible filmic friendship between Randall Miller and myself. Miller-of Bottle Shock notoriety-has crafted a generational spasm of a film. Granted, I would label it as a "hissy fit" but such indignation at least has purpose; children throw fits to gain. In this, "spasm" feels right, as the picture is a quick, annoying burst that's existence isn't really worth explaining. Box office returns don't validate it either, though this hardly has to do with the lackluster quality of the film itself. Nobel Son crawled onto 983 screens last December and managed to gross only $540,183 before quietly exiting theaters. Methinks that its fate is a fitting one. 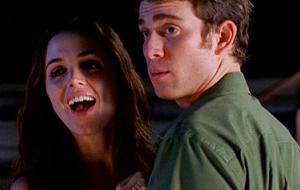 Not often does a director come around who inadvertently validates the competence of Guy Ritchie or, worse yet, Troy Duffy (The Boondock Saints). Ritchie made waves with glossy aesthetics and witty idiosyncrasies but struggles with cohesion and theme. Duffy is less ambitious and achieved cult acclaim by sucking the intellectualism out of Quentin Tarantino's usual M.O. and presenting it as stylistically cutting-edge. Miller's vision seems to draw from these inspirational wells, and generously at that, a practice akin to serving guests mud and telling them it's not gross but "organic".

From a distance the cast looks solid enough. Alan Rickman is there, as is Bill "Not To Be Confused With Paxton" Pullman, Danny DeVito, Eliza Dushku and a few others. The best crop of actors available they are not, but most of them are low-key these days, which makes it easier for audiences to see them as characters, not celebrities. This is something that works to Miller's advantage or, rather, would if he employed any type of realized characterization. Instead, he opts for the hyperbolic and strips his players of any moral ambiguity or insight. Rickman plays an egotistical genius that cares more about fame than family-a one-note waste of his talent. Meanwhile, Pullman plays the same sly detective that we've seen in every film ever made and DeVito is a "recovered" OCD sufferer or, naturally, still suffers from OCD. Worse are the youngsters (Bryan Greenberg, Shawn Hatosy, and Dushku) who are stuck between the typical archetypes of those from Generations X and Y. They revel in excess but are decidedly angsty and helpless without the technological. Instead of exploring their social hang-ups, Miller is content with drawing our attention to abs and asses-the sad reality being that these are their best features, both inside and out. I hope our director takes note that, when used for commentarial purposes, hyperbole can be fun.

Somewhere amidst all the color filtering, speed manipulations, and songs lifted from an Abercrombie and Fitch store is a story, just not a very good one. Greenberg's character Barkley, the son of Rickman's Eli, is kidnapped for ransom after the latter wins the Nobel Prize. There's more to the tale than this, but Miller handles all the material that should be interesting-estranged sons, former psychiatric patients, ethics of cannibalism, stolen theories, murder, and so on-in terribly rote ways. He seems more concerned with his Ritchie-Duffy hybrid aesthetic to aptly convey anything worth conveying and isn't self-aware enough as a filmmaker to do anything relevant with his blatantly post-modern strokes. If I sound dismissive of the film, it's because Miller is equally dismissive of his audience's intelligence. I'd say the latter is a far worse crime.